One of my personal bug bears is reading about actors who pride themselves on method acting. As hard as becoming a drunk or sleeping in a coffin to research a role sounds some poor writer went broke living in a bar or worked at a funeral home to write the script the actor is reading from.

On Friday night I was commissioned to write the tale of one mans turbulent and sometimes torrid times in Thailand. This meant sinking into the depths of Chiang Mai and stepping outside my ever expanding comfort zone to give me first hand research.

It started innocently enough, six beers were purchased from an ever available 7-11 and we visited the subject for some harmless observation. It would have been incredibly harmless except for the candidates uncanny ability to induce fits of laughter and take us from one outlandish situation to another.

At one point we were subjected to a sound track of the wiggles and then the bold claim of an intended kamikaze. The kamikaze we learned was the stripping of ones shirt, commandeering a neighbours apartment and then a horizontal repell around a balcony into another appartment whos owner had lost his key.

From here we left the appartment to visit the ominously named Van. The trip itself was not without event. Sadly tuk tuks were in short supply but with some guile we gained passage on the back of a utility vehice. The Van is actually a fully functional transformer but instead of transforming into a useless human like figure the van transforms into a bar. 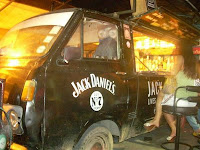 After nearly starting an international incident between New Zealand and Ireland we headed off to a more traditional night spot, Spicies. Spicies is a rich canvass to draw from. It is where all of the bar girls go after they finish work. It is also where most tourists and some of the truly desperate and depraved hang out. I affectionally branded the depraved as the Walrus. Spicies proudly adorned its entrance with this sign. 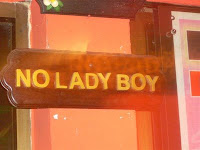 Unfortunately the music was sadly lacking along with the lady boys. My muse made like a pied piper and lead us off to the jovially named Lucky Bar. Lucky Bar is the last bar open. It is full of lady boys and it has incredible music. Unfortunately by this point our group had start to dissipate. We decided to eat an early breakfast it was 6am by this point.

Breakfast was novel in that I was proudly adopted as a husband by a nice chap who proceeded to massage me during my whole meal. Massage does improve ones digestion but sadly the vocal adulation caused me to laugh overly much with my mouth full. 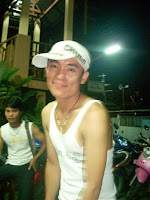 Method writing; it is harder than you think.

A Twice Written Tongue is Twice as Long

The First Elephant off the Rank Scroll to top