This morning we let off a series of pyrotechnics. There were two different types; orange smoke flares and molten red light flares. I elected for a smoke flare and with my best statue of liberty pose smoked out all of my class downwind. 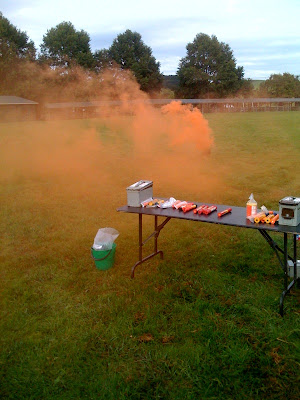 The next section of out day was spent leaping into progressively colder water in a variety of safety clothing. Swimming with a full ensemble of clothing poses it’s own challenges. Swimming in an immersion suit is down right hilarious. But not as hilarious as when you finally get out of your water and discover you hands and feet have swelled to enormous sizes encased in warm salty water and neoprene.

The real action part of the day was learning how to flip an upside down life raft and enter one wearing a life jacket in groups of three. Then as a full group we all donned life jackets. Our tutor dutifully singled out my wife to be nominated for a task. As all good husbands should I thought she would be elected the leader of our pod of floaters. Sadly she was to simulate being disabled which caused me much merriment. It was with much joy that I dragged her head first towards the life raft announcing to all and sundry that she was handicapped and to be wary.

Thus ended our practical part of the day. We returned to base to clean down our equipment and watch a horrifying documentary about a group of five sailors who had gone down in the Atlantic.

Two of the guys drank sea water and got incredibly crazy and ended up getting eaten by sharks after swimming towards imaginary safety. The girl with injuries died from shock after flipping out in the middle of the night.

One guy and a girl survived to suffer the ultimate American shame. They were rescued by Russian fishermen and made mention of this.

I’m sorry but If I ever find myself in such a position I will not be fussy.

The Great EFTPOS at pump conspiracy