Momentous occasions a plenty this week as our crew took possession of RoMa. Would you believe the only thing stopping us from moving on board was a set of mattresses that would not fit? All of the crew mattresses were a couple of inches short(I am feeling imperial) and our loving yard assured us that this was for safety reasons. Safety is a great catch all when explaining odd things about sea vessels.

Anyway you imagine a Yacht that has not had a chance to be cleaned properly for about six months is pretty filthy. So it was with great expectations that the deck squad attacked her over the weekend. We have a new member in our crew from Spain named David. David is a nice guy and seems very softly spoken. That being said Rush Limbaugh would have a hard time talking over the hot and steamy melange of Croatian, Italian, English, Maori, Latin, Swedish and German soup that is served up all day long on the deck here.

One of the funnier things that happened on our first day of washing down was a certain crew member getting stranded on top of the mast platform. I have promised not to name names. But his parents are reading and I am sure they would love to know how brave he was when faced with sliding to an uncomfortable death wedged between us and Giorgio Armani’s newest Yacht. I offered words of encouragement and amputated a door handle trying to find an alternative escape route. In the end after much laughter and the promise of a story the deckhand who shall remain nameless slithered down to safety and some gentle ridicule.

One of the more glamorous jobs as a deckhand is taking out the rubbish. On Thursday we unwittingly perfected the Baklänges rubbish run. After dutifully taking out a large amount of rubbish we were told we would have to recover some of the rubbish we had thrown out. Imagine explaining to dock security that yes you are taking rubbish back on board fished out of a skip.

We are going to be here for Christmas. If you missed our Christmas card. 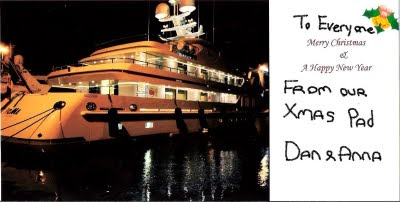 Black Lines……. Blowing through my mind Scroll to top