If you were to take the quickest route from Viareggio to Prague; drive through the Brenner pass and Austria enter Germany and stop after about nine hours with a couple of meal breaks…..

You would be in or very close to Regensburg.

The first real discovery of Regensburg was that my Wife had long dormant German speaking abilities. Quite how her high school saw fit to teach German and her to learn it is quite a puzzle. These skills started to unfurl over our short time in Regensburg and I was soon bedazzled by her counting to ten and reading random words with some authority. Now if I could just get her into some sort of uniform speaking German. Saucy.

Under the cover of snow we ventured out to find our first real German meal. Thai. Obviously we are quite fond of Thailand and its food having spent 6 weeks there and managing to be declared overstaying aliens. Finding Thai food in Germany was a real treat.

The next morning we put on our best disguises and got amongst the locals. Not really expecting anything and not knowing any better Regensburg was pleasantly surprising.

Deer are kind of a big deal in Germany. You can see them everywhere and the people of Germany have specially trained stag models which pose in shop windows. 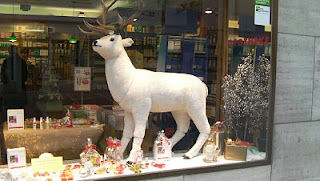 Hats are also a big deal. We found a shop devoted to all manner of hats. It must have employed about twenty people and it was going off. It had an awesome array of German cowboy hats.

Authors note. Do not call them German cowboy hats to a German. They are German hunting hats. They do not have cowboys.

Regensburg is quite pretty. It was a pretty grey day but we did have fun wandering around. There is a certain romance to being in a place you will probably never visit again. 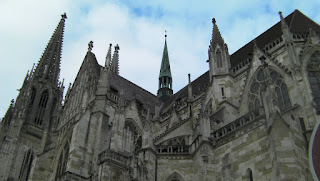 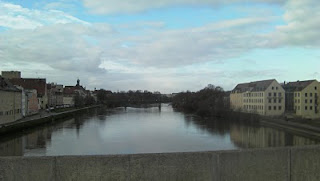 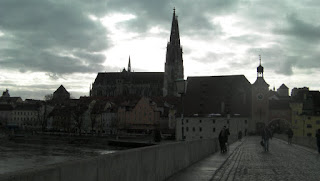 The only real blight on our visit to Regensburg was trying to find a genuinely German meal for lunch. Whilst it is easy to buy a kaffee and weiner for a snack. Trying to find a German pub or restaurant was woefully hard.

The best we could manage was finding a suspiciously German looking Italian restaurant named something Boticelli. Forgetting World War II, German/Italian endeavours can work ok. I am sitting inside a 62 metre German/Italian project. The meal was good and we were soon on the road to magical kingdom of Prague but that is another story…..

The increasing importance of soft toys

A whirlwind week or so
1 reply