Peter is one of our engineers. He was with us for a week when I started before he went home to his wife and the Birth of his first child.

Hailing from Split, Croatia Peter is the latest wedge in my ever expanding worldwide net. A smart and gregarious man. Peter often pops up out of a hatch or doorway to give free advice and critique the hard working but not always mechanically sound deck department. He often does this whilst puffing on a cigarette, such a debonair engineer is Peter.

My first real memory of Peter was during our very drunken bowling night. I was quite grumpy and not enjoying the bowling at all. Peter made some reassuring drunken noises and I felt better instantly.

Peters background is in commercial shipping and he us full of plenty anecdotes and comparisons. He explained the lodgings and vast spaces afforded engineers on commercial ships. The resounding advantage is being able to cure dead fish outside your cabin if you so desire and smoke everywhere.

It is through Peter that I learned one of the great secrets of modern sea bound engineers. They are walking reset button pushers. In a less than guarded moment Peter confided that they often do not know what they are doing but resetting machinery works a lot of the time. Sounds just like computers.

The deck dad moniker comes from this never ending torrent of information. He also likes to slap us on the back and will always change the music playing no matter what we say. He has also been known to fall asleep in the lounge watching TV. Just like Dad.

Engineering is all about the reset.
You know what I would do ? Let me tell you.
What is wrong with you ?
You should not drink too much fizzy water, I like beer but I would not drink it all day.(using twisted Deck Dad logic we can deduce fizzy water is as bad as beer). 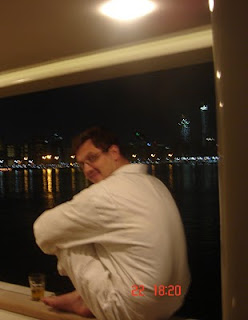 Next up we have a very zany crew member. In the short space of a month he has had more incidents ever thought possible. He is also South African. Stay tuned.

A couple of things