Once again I am Wifeless. A strange situation that is also familiar. Anna has got a temporary job on an explorer class yacht that is travelling through Norway and the Arctic circle. She is having a great time and I am very happy for her. She is on a predominantly English speaking boat. This is exactly what she needed. I am on a growing more German speaking boat every day. More about that later.

Enjoy some photos Anna took on my old iPhone. Now I am travelling through her. 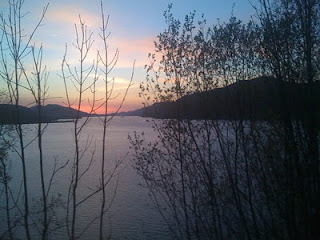 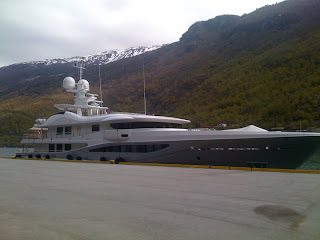 In the mean time I have been enjoying a very tumultuous time on the Yacht I still work on. I say still because from the original crew that left Viareggio with her in January only three will remain on Saturday.

There have been a lot of shake ups, shake downs and shake offs. One of the new faces is our Chief Officer Victor. Victor is from the Netherlands and is a knowledgeable type of bloke. He is also prone to barking, being rude and is extremely humpy. I now know that this is a charming Dutch trait. Apparently. Hence the Dutch terrier moniker.

During our recent charter Victor liked to spot things that were wrong and tell us we were fired. He also yelled a lot. I have been very lucky in my career that I have only worked with a couple of people that liked to yell a lot. He actually yelled so much that my wit had had enough after two weeks.

We had just left Nice and were sea fastening all of our furniture. We were on the sun when the Captain had to toot the air horns to signal to another vessel. The air horns are very loud and we all got a bit of a fright. Victor turned up a few minutes later to check and see if we got a fright. I casually remarked.

“The air horns were not that bad. We have had to listen to you yelling for the last while.”

This went down a treat and it is good to know that Victor can take a joke when he is not yelling.

In a not related but still quite interesting note. Did you know there are people on this very earth that do not know who Billy Connolly is?

In very freaking sad and unbelievable news but also understandable. The rock of the deck. The man who could move mountains. The happiest and most tranquil nice person I have ever met in the Northern Hemisphere. David “El Fuerte” Lopez is leaving us.

David has listened to me and Uncle Phil, bicker, rant, bullshit, tell tales, mock one another, cry and generally be crazy for six months. He has always been here for us and I am selfishly worried of what might happen with David not here.

We have been trying very hard not to be sad and have given some thought to what would be the ultimate send off for David. The list is now three weeks long but here are some of the highlights.

Apertifs at Hippo Campo
Pre dinner beers at the Red Lion
Dinner at Steakhouse Paradiso
Cocktails at Roccos’s
Pre party communal bath at the nearest fountain
After bath photo shoot with a horse statue
Donning of T-shirts with David’s photo on
Three man carnival down the passigata
Clubbing till dawn somewhere.

Uncle Phil will then begin his Holiday and David will fly home. I will start washing the boat with out them. Stink.

David’s wife who is a huge fan of my blog sent me this nice message.

This is a message to Filip and Dan, David’s farewell Do not do anything crazy from that can go to jail, that you know what you are planning, I want him to come home ehhh
Have fun, and I hope you to come to Vigo sometime. (Dan I invite you too, I’m thinking auqnue make me eat.) Here I will pass it very well.
A big kiss to both, Thanks for taking care of my husband.

He will not end up in jail but that would be a neat way to have him stay. Maybe not.

I actually have a long story about El Fuerte which is almost finished. I will publish it in the next week or so.

It is nice to be back in Viareggio. I have spent more time in Viareggio than any other place in the last couple of years. I know people here. I have a local pub. I am kind of a big deal here.

A couple of things
1 reply