Warning this could be a long one. I hope it was worth the wait.

Well what a week! I expected great things from this journey and it was an interesting peek into a sub culture, society, social experiment and a great laugh.

The expedition to Biarritz was an arduous one. A torrential down pour in the Cannes region last Saturday left the umbrella sales men very happy and travellers labouring to get anywhere. My train was stuck in Cannes for 1.5 hours on Sunday morning. I was left with my iPod and a copy of great expectations. Waiting and expecting I soon found the stomach to write up my Friday night experience and we were finally under way at 10:30 am. Two thirds of the train ride was very boring. The land directly after St Raphael to Toulouse is a flat very fertile farming region. Nothing that I have not seen before. In a theme that was to reoccur during my trip I reached a transcendental state fasting and waiting for a food salesman to appear. I was very happy when one did appear at 2pm.

I did feel a bit of anxiety when 3:30 pm passed and therefore my connecting train in Toulouse left the station. I made it into the Toulouse at 4:20 pm and was very lucky to get on a train to Biarritz straight away. The train was very full. It took me a couple of stops to get a seat and again I started to get very hungry. I did actually get off the train and attempted to use a vending machine during a stop but this proved fruitless as there was barely enough time to get money in the machine before the conductor blew his whistle and I leapt back onto the train. It was almost a teleport as I was very scared to lose my luggage.

Thankfully the scenery started to get a lot better and I took some high-speed iPhone photos that I know you have grown to love. The ones with light reflecting back from the window and motion blur. 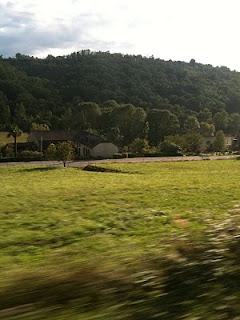 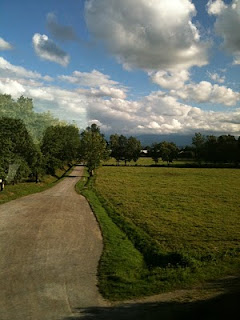 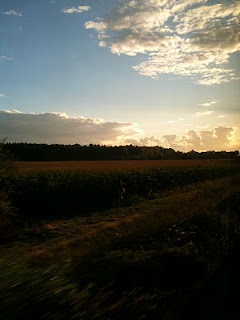 I was nearing Biarritz. I was almost there!

Now late last year Uncle Phil left us to return to Sweden for Christmas. He left the boat in a snow storm. All of the trains were stopped. He was left stranded in a small Italian town and sent me a txt saying.

“hi Dan, trains and planes are grounded. I am in now stuck in bum fuck Italy. Prego”

I found this very funny and poetic justice was served to me when my train ran out of electricity in Bayonne one stop from Biarritz. At least I think it ran out of electricity, that is all I could understand from the very nice conductor lady. She was sure I would get robbed or murdered and actually walked me all the way out of the train station to the taxi stop. I think the taxis had run out of fuel. I waited for a long time, shared a phone call with Uncle Phil letting him laugh at my predicament and even had time to eat a kebab before a taxi turned up.

I eventually made it to the promised land. The Biarittz camping ground is situated on the south side of Biarittz, it is about a ten minute walk to the nearest beach. The camping ground has great facilities, catering to camping, motor homing. it even has cabins a large pool and ping pong tables.

I was to be staying in a Swedish fortification. The Swede who runs the surfing camp lives a charmed life. He spends three months in Biarritz three months in Hawaii and the rest of his time in Sweden. I was welcomed with open arms and was soon getting to know Filip’s closest friends and soaking up a lot of Swedish ambience. With a lot of Swedish conversations bubbling away in the back ground I was soon learning new words and picking out old ones. I think if I lived among Swedes for a few months I would have some basic level of Swedish which could be useful in some far off future when Vikings rule the world again.

Swedish surfers on holiday are very peaceful. I soon found myself in a routine of sorts. I woke up, ate and showered and waited for Filip to wake up. Filip was battling a fearsome disease the entire length of our stay. I did my best to medicate him better but my attempts were only short lived. With Filip asleep I got to know the other camp people reasonably well. I certainly lead an interesting life. It is full of stories to tell and for that I am glad.The next section will introduce some of Filips closest friends and the profound impact they had on me and this review

Our first beach expedition was very exciting. Chris Pontius Party Boy aka Mr T aka Snus Man aka He Who would make love to a Midget aka Poodle really took it upon himself to live up to his reputation as a stand out person.

Chris is in the middle of growing the hair on his head for 1000 euros. A wager taken with another hair grower who was strangely absent in Sweden. The first person to cut his hair will pay the other 1000 euros.

Andreas is the Faceman of the A-Team. He has a reputation with the ladies. he is certainly very good at conversing with them. Someone did try to explain this for me during the week. Swedes have a reputation for being great lovers on account of Swedish Pornography, the thing is is that Swedish pornography is all produced in Denmark. Swedes on holiday are quite happy to further procreate this fallacy,

In fact, Andreas told me a very lewd Biarritz story about a successful outdoor romance that was almost foiled by some unsightly dog refuse. I will let your minds fill in the blanks. 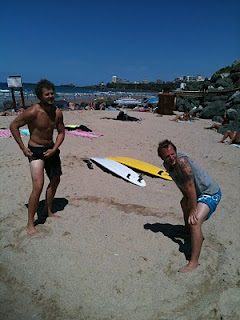 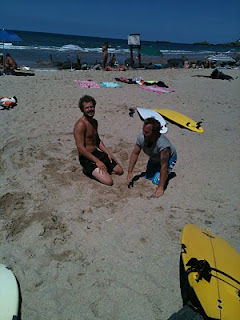 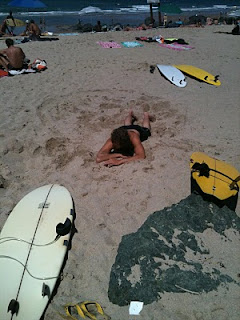 Shortly after the wrestling Chris made a small slip up which would haunt him for the rest of the holiday. He called a puddle a poodle. He told Andreas he was stepping on the poodles on the beach. Naturally his very curly hair, friendly nature and curious ways meant Chris was thereafter renamed the poodle.

We made a certain cafe with free Wifi our regular stop for free internet. they served a very passable mojito. It was here that we started planning the next leg of our journey. Andreas loves to plan things. These cafe sessions proved largely ineffectual on a part of the very good mojitos and the very good exposed breasts on display outside in the sun. Swedish men pride themselves on their breast finding radar and are literally incapacitated when it kicks in.

We had a very good impromptu party on the way back from the internet cafe at the base of some stairs. My JBL speaker system got a very good workout on the holiday. We went through three sets of batteries. It was here that Chris started chewing on straw. Something that suits him very well. 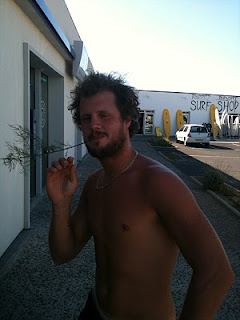 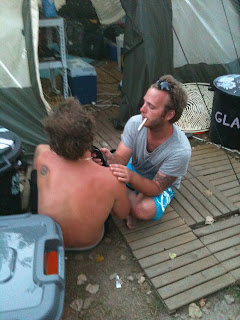 Chris needed some grooming before dinner. Andreas was only too happy to indulge him with some on the spot trimming.

The weather was good the next day but the surf was bad. We went back to the cafe and then went shopping in the town. Our grand plan was to visit the Casino. Chris was not wearing any shoes or a tshirt so he had to have a shopping session to clothe him appropriately.

We had a nice very late lunch and discovered that only Andreas and I had any ID. The Casino expedition would have to wait until night time. We would go to the Casino and go clubbing with our winnings!

A tent of Austrian girls had sprouted up near Swedeland. Chris was only too happy to invite them out with us. They were extreme Austrians setting up a tightrope in between two trees.

One of the Austrians wore a very fetching top. Hi Chris Peel! 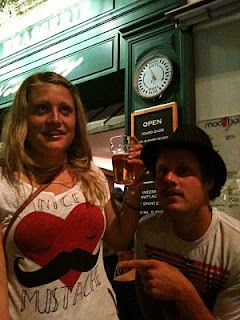 The Casino expedition went very well. I did quite well turning my 50 euro investment into 95 euros. We stopped for a kebab on our way to a bar and a very odd thing happened. We had been talking about going to Vegas and Vegas weddings and……. 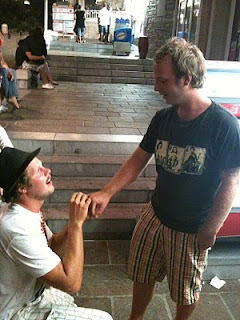 At this point I started to wonder what more could possibly happen?

More happened. We drank in some bars and then went to a nightclub. The nightclub had passably bad music, but we made the best of the bad situation by getting really Viking on everything. I met my first person from Finland. He was a disappointment, he overly enjoyed talking about fighting and stabbing people. In a strangely lucid moment the DJ played cotton eyed Joe, it was time to leave.

The 12 hours directly after we left the night club are a very hazy memory best left for the subscription only version of my blog. That means donate!

The strangest thing occurred on the following day. I was slumbering in my tent in the after party haze that always follows parties. A small poodle ran up to the front of our tent. It popped its head in as if to say hello and ran off. Weird? Definitely.

Let us leave Filips very entertaining friends alone for now, I am sure they will pop up again in some shape or form.

Sidestepping the inexorable march of capitalism, Biarritz remains a top notch surf town. The bay of Bisque dishes up nice waves. Biarritz close proximity to Spain gives the French town a slightly less French atmosphere. This is not to say the French are happy to see Swedish frog dances in the middle of the day on the side of the road. 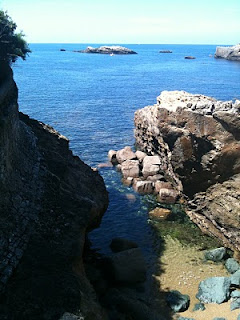 I really enjoyed camping in Biarritz. Everything was very easy. Sadly Chris and I did not have towels but everything else was provided by the camp organiser. We even had mains power. Something that my overladen donkey worth of gadgets did appreciate.

Since leaving Biarritz I have spent a night in Paris and am now in London. It seems another world away, and I suppose it is. It has taken some grit to realise I am not camping any more. Somehow Chris and I have kept travelling together, but he is off to Amsterdam tomorrow. Whimsically enough camping in Biarritz reminded me of home. My fondness for all things Sweden is probably kindled by an unconscious longing for home. In a pinch Swedes make for pretty good copies of New Zealanders. They are good natured, fun to have around and have an inner child not far away which I feel very at home with. 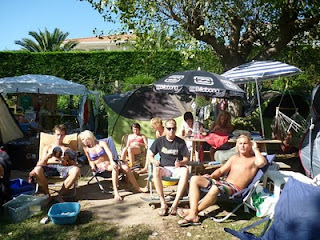 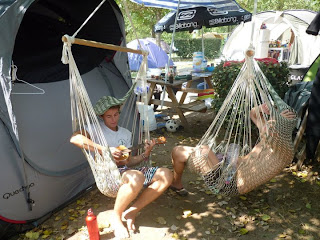 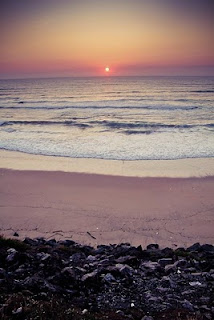 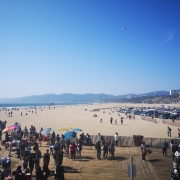