Landing back in the land of warm beer, inventive pub names and inclement weather was not shocking. More of a gentle nudge into reality.

The scenery around the East Midlands airport was very Christchurchish. The air on exiting the plane was relatively bracing and we soon joined the trudge of Ibiza dazed souls towards immigration. Being the only non EU passengers we were given a mild grilling by a very solemn passport stamper. With a minute to spare we boarded a bus to parts previously unknown, Derby.

The bus was very full, so full that we soon began listening to the very English  sport of…….. laughing at people trying to flag the bus down as the driver passes them by. Derby town seemed nice enough, I am pretty sure nearby Chatsworth is no relation to Chatsworth Estate which is where Shameless is set.

I did take a few photos of Derby so alien it felt. 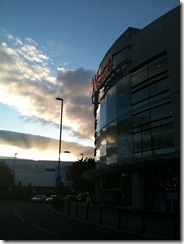 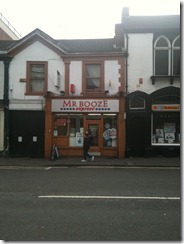 Our accommodation in Derby was very good. We did actually toss up the idea of remaining in Derby and doing a two hour commute to London for our appointments. This was written off as impractical, but part of me still wonders….

We then moved to London.

Ibiza has transformed my walking speed into a very leisurely gait. There is no place for gaiting pedestrians in London. There have been a fair few unsuccessful attempts on my life by cars, motorcycles and buses.

We found some very budget conscious accommodation in Peckham. Peckham is very, how shall I say…. urban. It is so urban that the local kebab salesman gave us the “You are not from around here are you” spiel. We thought he was just making conversation but after a couple of gaits through Peckham I began to seriously ruminate. I could feel an uneasiness which should be investigated on Wikipedia.

Peckham is a high-crime area with high levels of gang violence, for which it has a reputation, despite a £290 million regeneration programme in the late 1990s and early 2000s.[4][5][6] Camberwell and Peckham, the constituency that contains Peckham, is one of the most deprived in the country.

High crime rates aside, Peckham does have a lovely library and there are a lot of students and learning establishments which consoles me. It also has solicitors offering very reasonable rates for any alleged criminal who is charged. Something to think about

I spotted a t-shirt in a shop which I could normally get behind or in. 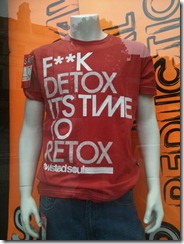 Our appointments have gone well and things were swimming along until Tuesday night when we found out that the couples job that we had our hearts set on had slipped away into a management and owner morass.

This was disheartening and upsetting. When you do not have a home,  jobs are a grounding force even when they float. More about that at a later date.

We saw our second West End show of our lives on Tuesday night. A fanciful tale Wicked. Wicked was well, choice. Modern musicals employ some amazing effects and technology. A firm child of movies and television I find myself gobsmacked at how real life, real life is. Sound silly? Good.

Where to from here?

Well the plan at the moment is…..

We will leave the UK this weekend. we are heading to Barcelona and then onto the glorious kingdom of Vigo and Prince El Fuerte and his gorgeous wife Andrea.

From here it will be back to Nice. I am going to do an mechanical engineering course which will improve the life lessons I have learned with lego. It should also help us with our job hunt.

We will get a couples job. It will be going to the Caribbean.

Sources Close to a Friend of said…..