Leaving mythical Zaragoza behind we were soon on the highway heading north east towards our next stop Leon.

My wonderment at Spain pitched up a level with the increasing profusion of wind farms. The Spanish are quite proud of their wind farms. Why else would they have so many?

The prevailing strong winds which sweep across the huge plateaus are used cleverly and in a Salvador Dali inspired moment I began to imagine we were in fact flying on a giant earthen airship. 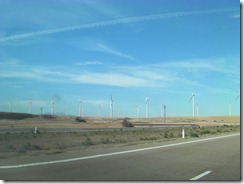 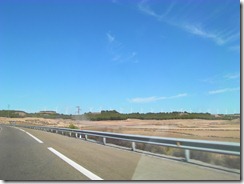 Wouldn’t that be cool?

There was by now increasing frequencies of vegetation and water. We were nearing Leon. In fact directly after we took the off ramp for Leon I got very excited.

We saw Cows! We had not seen any Cows since leaving New Zealand. We actually miss Cows so much we bought this little cup in Barcelona. 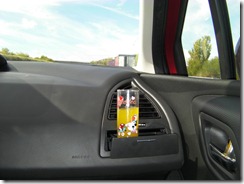 It is our medicine cup. Some of my readers will grasp the hidden meaning of this. It is unfortunate that Fanta here is a yellow colour but it works just the same, with a little sorcery.

Leon was well, Leon. We were not exactly excited to be there at first and with a couple of cracker places behind us and the heavenly Vigo ahead it seemed a bit disappointing.

We were hungry though and we ventured out to see what was on offer. 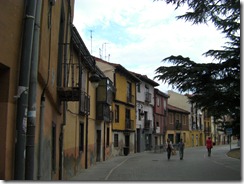 The shops were deathly quiet, so were the streets away from the high street. By now I was feeling quite assured that I was the tallest man in all of Spain. This was reaffirmed by this photo opportunity. 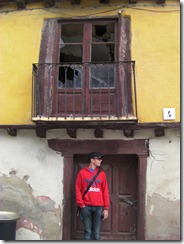 That is my best Filip impersonation.
As is the way with most places in Spain there was an impressive Church. 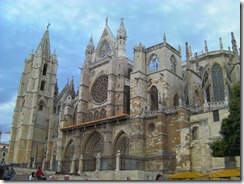 Shortly after the Church we found where the people of Leon had been hiding. Not since the fevered dance floors of Ibiza and festivals of London had I felt so much humanity around me. People were very well dressed and celebrating some Celtic,Gypsy,Spanish holiday. 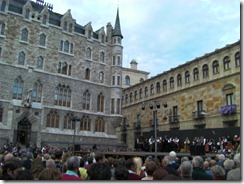 Feeling full of culture and very hungry we  began to get a bit frustrated with the lack of anything being open. There was a huge open air food market with roasting carcasses and other sweet treats but,

We retreated back to our hotel to find out…..

I am sure much has been written about the Mediterranean way of eating late into the evening. Probably by half starved gringos like me.

We did find food in after much walking around. We did not have to resort to a Kebab. Kebab shops are open all of the time.

I came away from that evening thinking that Leon did not have many visitors who were not from Spain.

We were now officially special.

With full stomachs and dreams in our minds we rested. The next day we would be in Vigo.