It has been a while since I have written a Deckhands log. Recently new few found working conditions have been a trifling  stifling for creative endeavours but in the past week  I unearthed a fantastic opportunity.

A further testament to the evolutionary organisation of this vessel. During charters we have a dedicated person who works throughout the night. An automaton who is rarely seen or heard.

Having spent many a night seeking pleasure the actual mechanics of working through the night promised to be a wholly new exciting experience. The night watch started at 10pm and was supposed to work through till 12 in the mid day.

With no body to talk to and glorious moonlight draped vistas surrounding me what revelations did I glean?

Firstly the Caribbean sea is absolutely full of underwater creatures. The underwater lighting that most yachts have attract them like New Yorkers to a hot dog stand.

Previously Dolphins  have danced in front of me. With new animals cavorting around I began to think of myself as a modern day Dr Doolittle who had marine animals to talk to throughout the night. Some of them looked a bit like Dolphins, a closer inspection was warranted. These Dolphins did not seem to be breathing much…… E Gads Dr Doolittle these Dolphins are in fact Sharks! Big ones small ones Sharks of every description preying on the smaller fish and Nightwatchmen who might fall into the water. 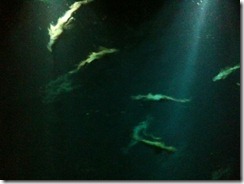 With my hopes dashed I left my water bound friends and began to gaze at the heavens. On our second night we had a full moon. This gave some illumination and let me spy upon WAFIs. What are WAFIs?My Captain was only to proud to inform me what they were when he briefed me on anchor watch.

When I first heard about anchor watches I thought it meant sitting on the bow with a torch watching the anchor chain for hours at a time. I do not think they have ever been this rudimentary.  With modern day technology, we can use Radar, GPS and Radio technology to make sure other vessels and the weather do not harm our homes.

A WAFI is a Wind Assisted Fucking Idiot. They are everywhere, usually drunk and do not obey the rules of the sea. One evening I actually saw a sailboat sailing very fast with no lights and with a serious lack of clues. It only takes a couple WAFI’s sailing around and you get instant trouble.

Do not for a second think I was wandering the decks peering into the sea and at the horizon for hours at a time. I was working furiously. With a task list that changed every night, I spent most of the time working through my lists and timing myself. Did you know it takes half an hour to clean a six metre tender? Half an hour to rinse and chamois half a deck passageway? With facts mounting like this my brain was swelling to unheard of sizes. With no human interaction between the hours of 10pm and 6am I began to reacquaint myself with myself. People pay money to experience life changing events like these!

The ramifications of staying up all night with no close friends other than coffee and engaging in physical labour are interesting. A curious thing happens with sun rise. A smart Vampire is climbing into his or her coffin. Only a stupid one stays to watch the sun. 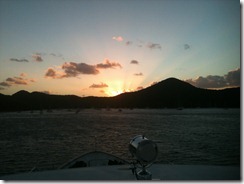 I call the two hours after the sunrise the Vampiric affliction period. You know you should be in bed but you foolishly think you are ok. Two hours in something really interesting happens. You start to become a Zombie! Communication is best done with one syllable words or grunts. It is best to only do the simplest of tasks, like holding a bucket. I also noticed if I had to write something on the white board some of my letters would be back to front. Perplexing? Certainly. Time seems to slow down and you are soon shuffling around looking undead !

That said I did try to find cures for the curses of Vampires and Zombies. In fact on the very last day of our charter I had this recipe concocted and in action.

Though out the night
Liberal doses of coffee,
Coca cola
Muesli

At 8:30 am I was pretty much ready for everything. Well almost anything. I was sent to bed!!!! Then instead of getting my usual 10 hours rest. I got three hours and then had to get up again. When I arose I really looked like a dead Vampire/Zombie. People have been telling me I look tired a lot recently. This is just a  nice way of saying you look like shit.

Thankfully I did get to sleep eventually and we had the next day off. A Monday even. I had myself a magic Monday. 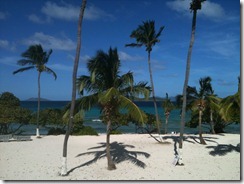 The sinister news. The next charter I will be……….

A Perfect Saturday Spoiled by Magic