With the curtain falling on our Caribbean sojourn it is time both to reflect on the past week and crystal ball gaze forwards to what might be.

The second week of our boss trip went smoothly enough I adjusted to daylight hours and our boss took the unprecedented step of actually cruising instead of hanging off Saint Barths like some very well appointed loiterer.We cruised Nevis, Antigua and Barbuda before returning to Saint Barths.

With out my phone it was hard to sneak photographs. So with some googe-fu I shall show you what I saw kind of. 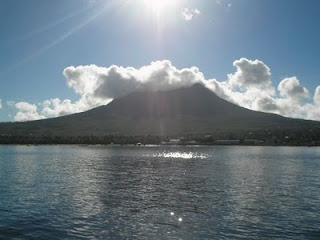 Nevis was clearly a dormant volcanoe, what made it intriguing is that the cone seemed to be perpetually surrounded in cloud. If it suddenly became active what would the cloud do? Would Nevis go red with embarrassment? The funniest thing I witnessed in Nevis was an interaction between our boss and a couple of the resort security guys. We were the only motor yacht for miles to see. This was the conversation.

Local “We be going to that yacht later on yo”
Boss “Sure cocktails start in an hour we have everything”
Local “Yeah it looks like my Uncles”
Boss” You remind me of my Brother…. he has the same teeth”

Antigua was nice and familiar. We actually tied the boat up which is unheard of for our boss. Eric Clapton’s boat turned up along side and I tried not to be star struck, much. Bring tied up allowed us to have a few drinks after work and reacquaint ourselves with the nearest watering hole.

Devon the barman was in fine spirits and somehow our conversation meandered towards the relative safety of Antigua as opposed to Saint Martin. It is here I must digress and let you know a part of the Carribean that I have glossed over as not to alarm you. It is quite dangerous here. We had a chef murdered about four boats down from us about a month ago. To put things in perspective,

“By some statistics, yachting is a dangerous occupation. Occupational dangerousness is generally measured in deaths per 100,000. Firefighting, for example, – an occupation just outside the top ten most dangerous jobs – is said to have an average of seven deaths per 100,000” However, with only about 40,000 yachties, and coupled with the fact that we have had more than four reported deaths in the last few months, yachting statistically is a “dangerous job.” In fact, yachting, following these statistics, is slightly more dangerous than firefighting. Dockwalk


Anyway Devon was happy to inform us that most of the violence in Antigua is gangsters murdering each other. They are generally good shots and the police take the pragmatic approach of letting them kill each other. Isn’t that nice? I have not felt unsafe here but my spidey sense has been triggered a couple of times and I am happy we are heading to the relative safety of Europe.


We spent a day anchored off Barbuda the next day. Barbuda reminded me a lot of the Maldives. A huge atoll with a massive beach, enough said.

Please admire how blasé I have become about tropical vistas

After Barbuda it was back to Saint Barths for familiarities sake and we dropped the Boss off in Saint Martin the very day. Back in Saint Martin it is pack, stow and lash before we head across the Atlantic again. Barcelona has been scrubbed from our list of destinations for one far more exotic……. Falmouth on the Cornish coast of England. This will be our home for 4-6 weeks while we have some work done. Cornwall is where my late Granny came from. So in a surprising fashion the universe has provided me with a way to pay my respects and inspect her roots.


From there it is off across the North sea and into the Baltic. We are going to cruise Norway, Sweden and the rest of Scandinavia. Although at the moment all I know about is Copenhagen in Denmark. Uncle Phil has promised he will bring the poodle down to Copenhagen.

We have lost a couple of crew with the end of the season. One of them was a tremendous beard grower on crossings. In the interest of science I will be attempting to grow a beard across the Atlantic. Photos forthcoming.

Not sure how much longer I will have internet. I will try and do some writing on the crossing in between beard growing, navigation and engine room watches. I am a bit disappointed with my writing output but I saw this quote the other day and smiled.

“Being a writer is like having homework every night for the rest of your life.”

I was absolutely terrible at homework so I think I am doing ok.

The Saint Barths Bucket, growing old and how to murder an iPhone in spectacular fashion

Deckhand · Niño
Deckhand · Gracias
Deckhand · Bohemia(ns)
The Saint Barths Bucket, growing old and how to murder an iPhone in spectacular...

The Atlantic crossing (West to East) Scroll to top