That large and bountiful universe luckily provided me with a chance to rediscover Greece and actually walk about on its varied landscapes working and not working. We went back to my perfect Greek island Symi. I actually had the chance to sit in the port drinking Greek chilled water, munch on a kebab and soak up the beating sun at 4pm. For a few minutes I actually felt like an honest to goodness tourist.

From Symi we made our way to Poros and I spied my good friend David “El Fuerte”‘s boat. In typical Spanish style he suggested I forget about my guests and join him for a beer. Sadly this did not transpire immediately but it is a funny thing that universe….We dropped off our final charter of the season in Athens and what an amazing feeling that was. It has been a long year and a lot of us will be moving onto greener and unknown pastures come the end of September.
Sadly with Anna feeling unwell it took us a while to celebrate effectively. What I did do on my first real day off in a couple of months was reacquaint myself with normal life. This involved catching a taxi, walking across busy streets, buying a mac book pro and air, fighting with my bank over the phone, almost leaving my ATM card in an ATM, filling a prescription and then returning back to the boat fearing for my seemingly lost social and society graces on land.My fears were short lived.
Athens and the Greeks that inhabit it have been uniformly hospitable and friendly. The very next day we caught a taxi to the Acropolis. What greeted us at the Acropolis was the busiest tourist attraction we have ever visited. The centuries old marble made for an impromptue hill sliding course. The hectnicess of the Acropolis was unerring and I think we were about 2500 years late for the best of it.
For a country in the depths of a financial bail out, Athens felt very lively and vibrant. I couldn’t stop thinking where is the recession? and if they are in a recession they could do a couple of small things to get them out of it. Let me explain.
Service?
Getting service at a bar or restaurant is a hit or miss affair. Giving a waiter the nod is not enough, After a week in Athens I have started waving my arms like an aerobics instructor. When you finally get service you then go through a long indeterminable amount of time before your order turns up. This is compounded by a one waiter policy for a lot of places during large chunks of the day. If you go directly to the bar you will be shooed away. People in service are also taken aback when you give them a tip, a shame really.During a long stint at a bar last night I actually came up with a theory for this service. If they served tourists drinks on time everyone would be barking drunk at 8pm. If you drip feed tourists drinks they spend more money. Clever eh?
Taxis?
Having been pre warned about the interesting taxi drivers which populace Greece we expected the worse and came off not that wounded. The only thing which seemed a bit disingenuous were the rolling taxi strikes which cleaned the streets and made Athens safe to walk about in. If you are going to strike for your rights surely it is better to be missed and not gladly so.
Summer?
Officially Summer has finished with the start of September in the northern hemisphere. That doesn’t mean it is cold in Greece. It is still scorching and we tried to visit a pool bar last week for a swim. Sadly we were told the pool was closed as summer was over. Naturally we sweated off elsewhere. Maybe things would have been different if we had….
The DOM effect
Strangely many of the things I have identified as problems with service dissipate when you order a bottle of DOM. With Anna on the mend and the great Aussie Battler having had a really bad Friday we decided to go and have a nice meal at a local restaurant. With the Battler and I looking particularly antipodean we were ushered into a table far away from the view of the marina. Once we ordered our bottle of DOM we were moved to a VIP table and had non stop service for three hours. After the second bottle we started getting frozen mojitos, fruit platters and a free fawning Matridi’.
There appears to be a sliding bar of money spent in Greece which equals free stuff. We reached this bar a few times and it was a nice touch.
Beware of Business in Greece
Before we go to Greece I had at least two people tell me that Greeks are renown for being canny in business. One of these people was my old Captain Richard Dunnais so I was particularly wary of doing any sort of business. Luckily all of my business deals were simply tourist or consumer in nature but that did not stop me from witnessing a strange set of events as we tried to leave.We had three different yacht surveyors visit us in Athens before we left. They all found different things wrong with us. They all played off each other and it very nearly went pear shaped when we had to leave. There was a mercy dash to the local police station by our Chief Engineer with a crew list and passports. We could have very nearly been impounded or stuck in Athens for months because of tricky business practices.
Naturally if you are trying to encourage foreigners to invest or encourage yachts to stop by for winter or even just gather more tax these nefarious practices are not going to help your cause.
Best Moments in Athens
One of my best moments in Athens was directly after the DOM evening when Anna, the battler and myself decided to have an impromptu bow party. It was the first time I have used my decks in about two months and it was a classic session. 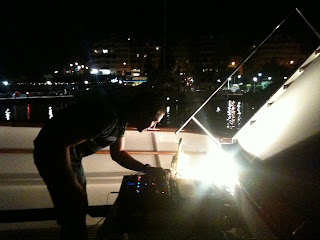 To say the party was intimate is perhaps grandiose. But for the umpteempth time in the past few years I found myself saying wow to myself and feeling quite blessed at what transpires when things come together.
The following Sunday we felt the earth tremor and the temperature go up a couple of notches. By jove! El Fuerte was close at hand. I ran to the bow and saw his boat coming in. He was on the bow as well but despite my best efforts to flag him down he walked around in circles talking earnestly on his radio. He may have been talking to his wife on his cell phone, my eyes could not quite make him out.
His season had finished and we had a fair few catch up drinks that evening in a funny little bar called Okio. I got to meet some of his crew and they all seemed very cool, even the Croatian lived in NZ which I could not fault him for. David got to meet some of my crew, including our larger than life Chef who was even for his standards quite skeweth. I think it was about 11:15 when I ushered the Chef out with David close behind. I am not sure what Davids plans are but I hope I will get to see him and Filip somewhere before the end of the year. Maybe we can watch a game of football.
Thats it.
That was my time in Greece. I should like to visit again, maybe next time I will be a guest on a Super Yacht. Just putting it out there. It seems to work.
I will leave you with some cowboy Greek which was provided to me by my sisters partner Vicky.
Parakalo – please
Efharisto – thankyou
Mi pouleesees ti yineka mou, parakalo- Dont sell my wife please
Kalimera – good day
Dio calamari parakalo- 2 of your squid please
Halia katastasi – awful situation(use when discussing the economy)
Pou eine ee toileta? – where is the toilet?
Ohi – no
Ohi apo piso efharisto – no, not from behind thank you
Ne – yesNe thelo bira – yes i want beer
fere bira – bring beer
Fere bira tora – bring beer now
Malaka – wanker
Malaka – friend(dependent on your delivery)
Mboro na daniso to gaitouri sas?- can i borrow your donkey?
Sadly I did not progress much further than saying Malaka a lot. But I did say it both ways.
September 19, 2011/0 Comments/by El Draco
https://theselines.com/wp-content/uploads/2021/05/Myriad-Lines-3.jpg 1413 2133 El Draco https://theselines.com/wp-content/uploads/2021/04/These-Lines-Logo-Slim-White.png El Draco2011-09-19 15:34:002021-05-06 00:31:52Greece Redux

Back in Barcelona Scroll to top