Pretty much a year ago I began what was to be one of the hardest and most challenging periods of my working life. I actually have a large and exclamatory rant festering inside myself detailing the hardships and personalities I endured which was about to rupture last weekend. Thankfully things changed. What happened? Well I got back to Barcelona and started a new job. Not just any job mind you this is my dream job.

This new job is shrouded in secrecy. I have not writen much about my new job because,

So given that this is probably a dream and not real I think I can write some thing about my new job and living in Barcelona. We arrived in Barcelona on Monday morning. We should have tied up my old boat at about 9:30am….. But the old girl in a show of mild protest decided to have a mechanical malfunction and we sat offshore for an hour or so pacing the decks and looking longingly at land. Thankfully after a show of engineering know how we got ourselves into port and I set about looking busy until I was given my passport and permission to leave.

I was quite anxious to see my new boat, in a show of niceness I had given about six weeks notice to my old boat and I knew my new boss had been struggling without me. After security fomaltities at the shipyard I called my new boss and we soon were aboard my new vessel. I am not allowed to show you any photos of the vessel but in a show of Spanish modesty the yard had draped this fitting drape of non non-disclosure over her. 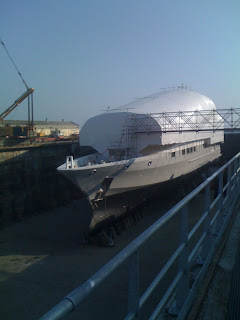 As you can see it is quite a large Motor Yacht. I am not allowed to say how big but if you look closely you will see a small Lego man in the bottom left corner. My first impressions of my new place of work is that it is very large and there is a lot of things to be done before we leave in about five months.

I am an ETO(Electrical Technical Officer) on this boat which in addition to usual IT functions means quite a bit of electrical work. I have been wiring up plug points and fittings and although I do not have a background in this work I am very glad I spent hours racing radio controlled cars as a kid because I know my way around shrink tape and power blocks. That has not stopped me from stabbing myself with snips and screw drivers on a few occasions. To give you an idea of the amount of work we have going on. Our last estimate was we have 10 kilometers of new cabling to lay. 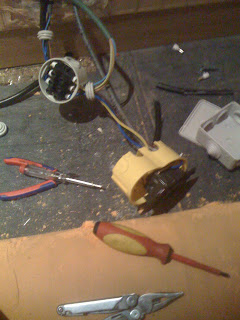 I may have taken a photo of some of this work strongly resembling mine.
Obviously we have a lot of Spanish speaking workers on board and I have been learning some Espanol to add to my limited vocabulary. El Fuerte remains quite the gentlemen because these Spanish workers have all manner of inventive words which El Fuerte never taught us. It appears there will be enough interested crew to start some Spanish lessons soon. Bring it.
Other than that I have overalls to wear and it has to be said if you can not wear a man bag, wear overalls. Pockets for days Bro. My new crew is very nice and it is cool to be working with more Kiwis and some Irish. That being said if South Africa win the world cup I will probably quit.
One of my first tricks in Barcelona was to secure a bike. I payed for it at a sports store and went through a lengthy interrogation for a customer loyalty card. There are so many bikes stolen in Barcelona that shops know you will be back for another one. I enjoy riding around Barcelona, the city is made to roll upon and it seems easier to be on a bike than in a car or another motorized transport.

Please enjoy some very quick snaps I took on Saturday morning. This is some buildings on my ride to work. 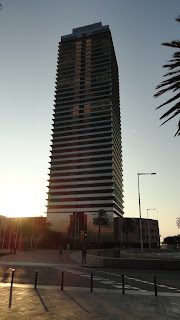 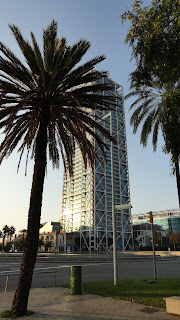 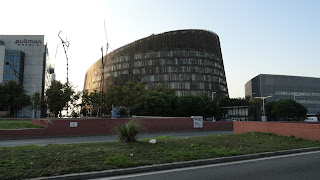 My next foray into bicycle shooting will be mounting a tripod on my handlebars for video recording. Stay tuned. I might need to mount my GPS first. Much of Barcelona remains a mystery.

Thankfully my new Casa is fantastic. It is a large three bedroomed apartment in this very building. 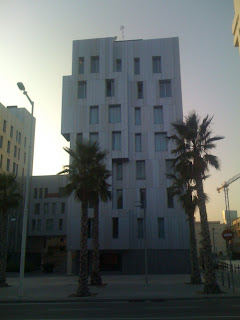 Knowing I will have a home of sorts for a few months is very satisfying. We have a large sound system which has already been connected to the ironing board and although my room is quite small it is not a cabin! A nice surprise yesterday was finding out we have a rooftop complete with nice views, a small pool and jacuzzi. 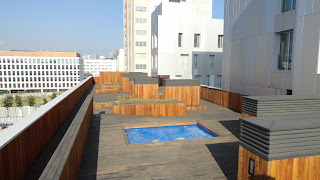 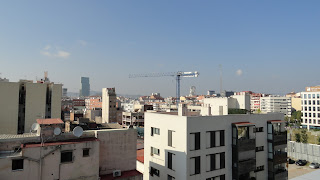 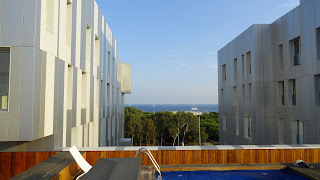 What I learned today and other earthshaking possibilities