So I just had one of the best Saturdays I have had in a long time almost completely ruined by Magic. How could this happen? What could Magic mar? My perfect saturday went something like this.

I arose at approximately 10 minutes past 8am with a slightly fuzzy head and fuzzy mouth that attending a dock BBQ the night before bequeathes. I had a lovely if sporadic chat with my wife via Skype and then ate a healthy breakfast and rode my bicycle to the gym. My ride to the gym or work is wonderful. We had a stunningly clear autumns day here on Saturday and my ride was not at all that different from this.

Media prepared earlier, been waiting to use that one. This blog entry is all about the media, multi even.

After exercising and swimming at the gym I returned home and pottered about on the internet for about an hour or so. I then went to the nearest Japanese restaurant and dined on some fine Japanese food. I learned an incredibly handy Spanish phrase. Cafe con Tardo this gets you an Espresso with a dash or milk. I engaged in some shopping, unfortunately like large sections of Asia Spanish people have small heads so finding suitable caps is hard work. Thankfully Spanish surfers have larger heads than the football players or runners.

I returned home 3pm in time to turn myself around and get ready for one of the standout epic performances of my life.

Somewhere in my childhood I developed a taste for monster trucks, probably around when I used to play with radio controlled cars. I have had a latent hankering to see a real life monster truck for at least 20 years. Seeing Monster Trucks in the Olympic Stadium in Barcelona was a dream come true. There was a reasonable posse from our boat who went to have a look. One of the Engineers took his mum who had come to visit. Another one of the Engineers took his girlfriend he had not seen for a month. Engineers always on the look out for horsepower.

We got reasonably lost on the way to the Monster Trucks. We abandoned our taxi in the heaving traffic jam which was people trying to get to the Monster Truck Jam. We scrambled up a hill gouging ourselves on thorn bushes and dodging broken bottles. We then, after getting warned not to, got in a cable car which proceeded to take us away from the stadium. 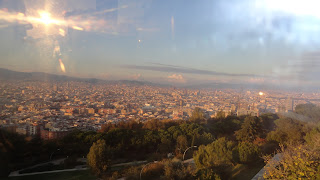 Thankfully there was a wonderful Swedish couple in our cable car who stopped us going to the panic. I had exhausted all of my social Swedish before we had left the cable car and it was another mad dash to the stadium and the monsters!

Actual panoramic photo of the stadium. Told you I was going all out.

Sensibly you might not think you can make three hours family entertainment out of 10 Monster Trucks some earth movers and a few motorcycles. Well that is where you are very wrong. The first section of the evening were a series of time trials around the oval course. Two Monster Trucks would square off and try not to destroy the track or each other. 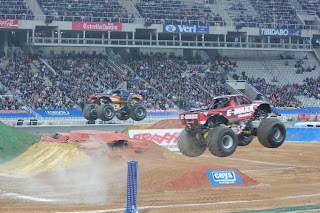 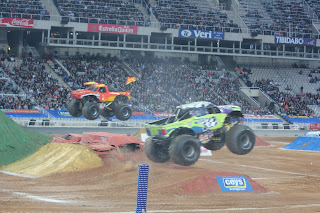 Unfortunately Bigfoot was not in attendance but dirty old Grave Digger was there looking scary and menacing. 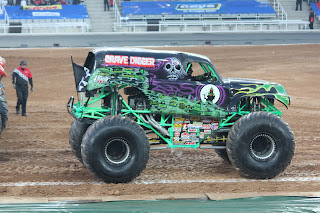 The highlight of the time trial section was Maximum Destruction rolling his truck and landing it upside down. There was a palpable silence and thankfully the portly driver emerged unscathed. He then proceeded to pick up a bit of the destroyed bodywork and wave it triumphantly at the crowd. He was given a bottle of champagne for his efforts.

There were a few intervals during the Monster Trucks. The first couple of intervals had a monster golf cart enter the stadium with a jet turbine which made an incredible noise and had impressive flames billowing from it’s engine. 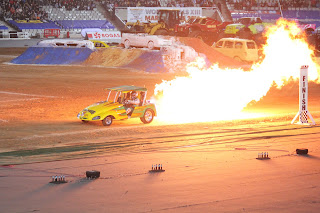 A troupe of motorcyclists were bought out who did some very impressive jumps and tricks. But the crowd were all waiting for the main course of the evening. The freestyle. The trucks were each given 90 seconds to drive around the course doing jumps, smashing cars and doing doughnuts. They were then marked by three judges. A lot of the trucks went upside down in this section with maximum destruction coming out with half of his body kit missing only to lose all of his body kit. 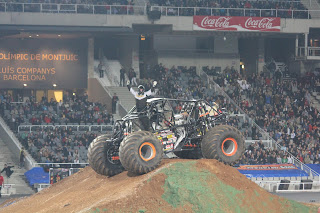 Three trucks went upside down in this section with the drivers egging themselves and each other to do more and more crazy things. The crowd favourite El Toro Loco did this unbelieveable manuerve and ended up getting the most points. It was magic and not the kind which was to surface seven hours later.
With the monster trucks over I left the stadium at breakneck speed and without breaking my neck I descended the what felt like a mountain and hailed a taxi to take me home. Pausing to change my clothes I then went to Sam’s place to wait before we started an evening of his choosing. Sam is a good natured Englishman that works in our team  Being English I have latched onto him as someone to banter with in my own tongue. Strangely enough he is from Guilford where James Lovejoy was from. He also has a strange attraction to mirrors.
Sam was eating a dinner inside with his girlfriend. What they were eating is anyones guess as the day before his water and gas had been turned off. I think they were eating kebabs. English people love kebabs. I sat down under the trees drinking cider from the local bar, the black horse. With Sam and his girlfriend ready we made our way to Marmalade bar in Raval. It turned out Sam had kludged his plumbing so he did at least have water and did not smell much.
Marmalade bar was convivial enough. It served very passable mojitos but its real talent lay in its proximity to Barcelona’s very famous Bar Marcella. Bar Marcella has been open since 1820 and has had some famous patrons over the years including Dali, Picasso, Gaudi and Hemingway. Naturally I was quite keen to add my name to the list. What greeted me in Marcella was the very pungent smell of Absinthe and a decaying Dali’ish roof. Immediately I noticed that people were always in a hurry to leave. Sam got us a round of Absinthe and I was interested to see that Absinthe is an amber coloured liquid in its natural form. It is not until you have added molten sugar that it turns green. I think we all turned green soon after and we were soon barelleling out the door much like the people who had greeted us on our way in.
It is worth noting that was now well after 12 my perfect Saturday was finished. With the liquid devil of Absinthe coursing through our veins we made a what turned out to be fatal decision. We would go to a bar that had been recommended by an increasingly dubious American. We would go to Magic Bar.
Up until Sunday morning I had been living in a delightful bubble believing Barcelona to be a truly cosmopolitan place with vibrant and exciting things to see and do at every corner. Magic Bar certainly sounded interesting, there was a healthy queue and we all felt anticipation and a bit queazy with excitement. That could have been the absinthe.
What greeted me was truly sad. I lasted about three minutes in Magic bar. It was a truly tragic place. I think it should have been called Anti Magic bar or Euthanasia. Deeply depraved people walking around and swaying dangerously. I wouldn’t have been surprised to have seen someone fall over dead. It turns out my amazing taste in music has give me some Bourne Identity like conditioning. Hearing Crocodile rock being played over a loud PA system was enough to make me walk out without saying goodbye and get safely into a taxi.
Sam being English stayed around to drink his free drink and mine. He lasted about half an hour before he left to get another kebab. He has photos of weird people including a chap he named Snake hips the rapist. Magic Bar what a crock. On Monday we devoted vast tracts of the day trying to understand how Magic bar stays open. Our best theory is that people go there to kill a night. If you are actually having too much fun and need to knock a night on the head. Magic bar is the place to be. Maybe you want to ditch a date or sober up? Magic bar where your dreams come true.

That was my mighty Saturday. May there be many more minus the Magic.

The Gaul of it

A small slice of Pisa