Happy New Year! I started writing this a few days before but I expect it will be well after New Years when I post it. When I last left you we were in Barbados. After leaving Barbados we steamed steadily northwards to Saint Thomas. America being America, we did not tie up because of the lengthy and ridiculous red tape. Our boss choppered onboard and so commenced our Christmas and New Years boss trip.

To say I was a bit nervous about the trip is a bit of an understatement. I had not met the owner and have had limited dealings with his nationality before. I am not at liberty to divulge details about him but some of my writing might give some clues.

*Women with gigantic boobs who would like them measured on stage and talk about them.
*Attractive twins talk about being attractive and being twins.

These are not channels that I have hunted to find. These shows are on the first main news channel of a country in Europe.

Six days out from New Years we got bundled with the task of creating a party out of thin air with the same setup as we had during our Mediterranean season. What the powers that be did not understand is that the parties we had during our Med season were setup by a dedicated team of roadies who followed on an 80m support boat. Not to be discouraged the technical department and our very capable Purser moved a few mountains to accomplish the impossible.

Our first problem was booking a DJ. Sadly the DJ’s that commonly DJ to this circle of people appear to be wankers. One of our DJ’s actually wanted to find out how much money our Boss wanted to spend before he set his price. Another one wanted to charge us 5k to hire some DJ equipment.

This incensed me. I know a little bit about DJing. I actually program my Boss’s gym music and if I was a bit sneakier I would have casually slipped a deckhand mix in to promote myself.  Anyway as soon as we got to Saint Martin I went off to buy some frigging DJ equipment. It would cost less than 5K and it would be top notch.

I felt a bit guilty leaving the boat, but it was really nice to get some sun. I did some epic bartering and got.

for less that 5k US. This was a very good price.

My only problem was carrying it back to our tender through Philips-burg  I had side walk singers serenading my stomping self lugging my loot. I even had a taxi driver offer me a ride as I entered the marina. I do not know where he was going to drive me. 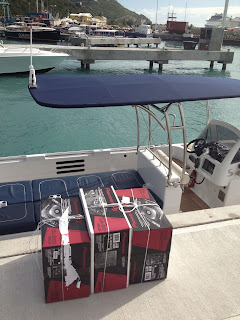 After collecting our Captain at the airport we made a very bumpy and wet passage back to the mothership. We had problems immediately after leaving Saint Martin. The bucket which drives the jet seemed to not be engaging correctly. Being that it is one of our two New Zealand made tenders and I was the only Kiwi and member of our glorious engineering team I felt obliged to investigate. 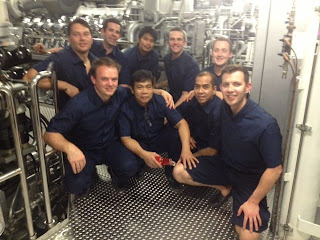 Photo of glorious engineering team. Photo blurred to protect the innocent.
After investigating the jet and watching the bucket move freely I declared the vessel “she’ll be right’ status and she was. By now it was getting quite dark. The sea was quite rough and it felt like something from an old Moby Dick movie. I could actually envisage buckets of water being thrown off camera into my face. The deckhand driving the tender was a little bit worried about finding his way back home. He needn’t have been. We stood out like a huge floating Christmas tree with each deck being colored Red/Green or White in led lighting. We are the only yacht in the world to my knowledge that can do that on a whim. I felt quite proud returning to her.
The next day we got busy and assembled a huge lighting truss. It reminded me of happy days gone by working in the sun before it poured down with rain or hail at one of Jarras awesome parties. 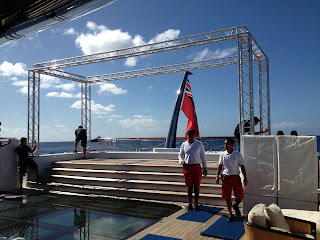 That evening I got out the DJ equipment and made sure it worked in my office. 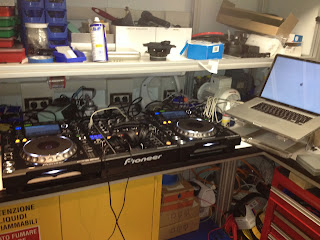 It worked fine. The next day was the day of our party. We did a couple of tender runs to get our equipment. It turns out that NZ made tenders make awesome large speaker conveyancing vessels. Our Fijian lead deckhand was more than happy to let me drive for a bit. This was great. I did not get to drive a tender for a whole year on my last boat and it is supposed to be harder to do things like that on large boats. I guess that just shows what a family style boat I work on now. 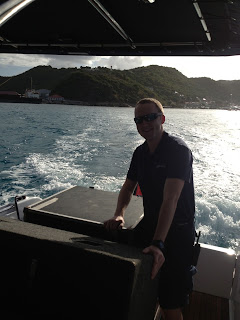 Engineer ‘Mouldy’ with a speaker
We had a French sound technician arrive with the speakers. We did a sound check after we had plugged them in with my iPhone. It sounded incredible, things were looking good. Our DJ arrived just before lunch. His name is DJ Jus Ske. I had never heard of him but I think hes someone on his way up. Sadly if you google him his claim to fame is having been Lindsay Lohans BF. The internet is a bitch like that. I befriended him and tried to brief him on the Boss’s music tastes. I did put some fear into him when i told him we had over 600 gigs of music on board and the Boss likes to listen to Trance when he works out. Jus Ske retired to his Cabin and I made sure he had some football to watch.
Our other entertainment turned up later that afternoon. I was busy flapping about with other things so I did not meet her until later. Her name is Mia Femi and she is another artist that I think is on her way to stardom.
As darkness fell our party began in earnest. Our first issue was creating a custom lighting scheme out of thin air on the fly for the Boss. These are the sort of things that you would like to prepare before hand but with some clever radio work, use of CCTV and frantic clicking we got a blueish hue working just in time.
The second problem was of a musical nature. Our stage setup was not near our usual entertainment setup. I setup my diagnostic laptop and it went into random mode pulling out some dubstepish tunes from that 600 gig music library. Largess is a curse. I requested that the DJ be summoned. He was summoned and soon busied himself playing to what can only be described as a tough crowd.
Our singer came out about an hour later. I do believe I was a bit gob smacked.

Luckily she was wearing high heels and we had to tell her to remove them. I always find if someone is incredibly attractive asking them to remove their shoes is a great leveller  Thankfully she was very pleasant and made for a good laugh as the party progressed and she and the DJ had to deal with requests.

Looking back I do not think I could take money to be a DJ. Requests make me angry. I guess that is where being a professional comes in. I guess thats why I like writing. Its not like I have some reader critiquing me as I go and asking me to change things. The words just come out of my fingers freely. Woe betide my first editor.
Mia and Jus Ske were both from New York. They were both New York cool. They both thought tenders arriving with red and green lights were Police boats. Bless New Yorkers. I did illegally take a couple of photos of them both performing. No police boats arrived. 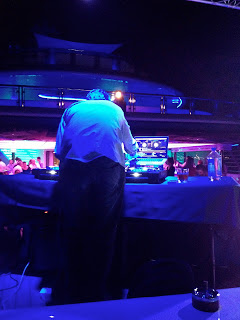 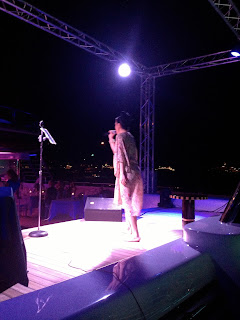 Mia, notice the lack of shoes.

I had to do a running repair on Mia’s laptop HDD. I felt special. I fetched a couple of strong drinks for our sound engineer who also needed regular cigarette breaks. Bless the French. The night went very well until the end when….. I had to turn down a day of Saint Barths exploring with Mia and a trip to Puffys party with Justin. Puffy is Puff Daddy or Sean Coombs latest nickname. Naturally I had to inform them that I was working and I regretfully decline.

I think that is the definition of a catch-22 If I wasn’t working I would be able to do these things but if I did not have the job that I do there is little chance I would meet these people. Until I get famous of course :-).

It was about 2am on New Years eve before we had packed down. Naturally New Years eve was an anticlimax. George the first engineer and I DJ’d in the crew mess to a very fickle crowd, I would say it was tougher than the crowd from the night before. I had my head on a table at 12:01am, I was absolutely buggered.

Quite an Awesome Xmas tale that one I think.

Case Closed. Time to turn the page. Scroll to top