This was my overriding feeling when I jumped ship. A couple of days with friends in a fresh city. Some exploring and some escapades and I would be back to new. I needed these days to get my sorely tested head in order. There was some relief in leaving but there was also an unhealthy amount of sadness mixed in.
I flew German Wings to Berlin. Top marks for leg room GW. A minus for only having bread for meals and no vodka. Berlin snuck up on me like a pastel impressionists legopolis (new word). It’s certainly a very green and attractive city in Summer.
I taxied quite swiftly to Michael Pattisons house/studio/kitchen/urban yoga platform and busied myself with reacquainting myself with a good friend. When looking for a place to visit Mr Pattison appeared in a zebra print tennis two piece (at least that’s what I hoped it was) on my Facebook stream.  This therefore was the logical place to go. 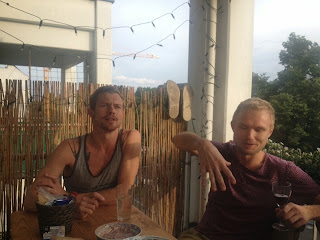 Michael and his husband Ole. Ole is throwing a gangsign naturally.
Michaels abode was quite busy. He was creating clothes for a shoot. Cooking dinner for his husband, clearing his mind with yoga and would like to learn how to DJ for good measure. After some liquid persuasion I volunteered my services. It would only take a couple of hours, maybe three if he decided to do something else mid lesson. There were a lot of transient circus type people visiting. I am not exaggerating so the next morning I thought I would go for a long walk and clear my head.
Berlin on the ground was an altogether disjointing experience. History tells a tale of two cities but I could feel at least five or six in my wanderings. There are themes of many cultures and places running through it. 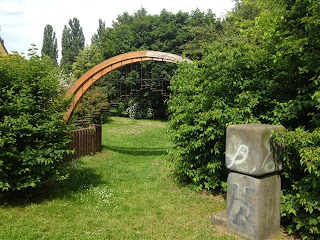 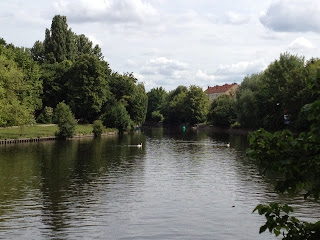 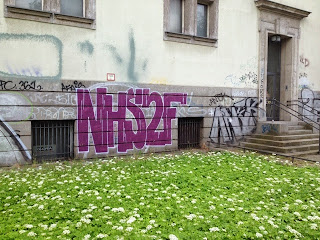 Doesn’t look like a city does it?  I expect it looks much more sparse in Winter but in Summer it’s a green and rich place.
I found a hotel to move into. It was large and functionally opulent and it here I must talk about native Berlinites. They are very German. To be fair you would not notice them unless you deviate from the laws of Berlin. Being a devout pedestrian is one of the rules. If you disobey the road rules you will be shouted at. You will also be spoken to firmly if you occupy a full lane in a supermarket eyeing up 2 kilo bags of haribo. There are many other rules I am sure but I only broke two in my time.
I am sure I would’ve broken more if I had more time. Sadly my time did not fall over a weekend. Berlin is arrestingly hedonist, probably due to the many rules. I managed to find much silliness on week days. I also found good food thanks to chef du parti Pattison. I didn’t eat out except for McDonalds which agrieved a German friend. I did need some McDonalds during my circumnavigation what else would one eat ?
On my last full day DJ training began in earnest. Michael whipped me up a Zebra print shirt which is the last of a proud line. It is a very festive looking number and will probably be trotted out at splore or a suitable festival, maybe the Kerikeri farmers market? I met more interesting people and shared some of my interesting tales that grow by the month.
It was a little sad to say goodbye but I felt nourished and happier for my time in Berlin. Just what I needed before I began writing my own story again. 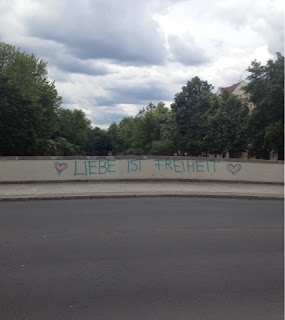 A Litany of Scams