I am actually half way writing the tale of returning home but a bigger story broke yesterday on Monday the 16th of January.

Anyone who has visited us in the past few years have probably heard us gush over our river boundary. The problem with the river though is that has been a secretive sort. We can hear it when it rains a lot but it has been well hidden.

I think my Cousin Matthew was the first man to try and find the river in earnest. Being an Accountant. He outsourced and he sent his two young girls. They could not find it.

At one of our yearly parties. A very good friend told me drunken machete work was the only way to clear a path. Sadly after the drunkenness evaporated the machetes never appeared.

So I have whittled away at the gorse and tobacco weed. Unearthed many a native. This year though. The year of turning 40 I was determined that we would get there somehow, some way.

I had some heavy machinery ready. I had an aerial survey done.

But a wise Sangster said we should take a look on foot before committing our Trump card. To be completely honest I just wanted to groom the hillside with a digger but what the hell. We put our best Gum boots on and headed east.

Using our Survey we bashed our way through gorse and other unsavoury weeds until we hit a dead end. Our hopes almost dashed we then took the enligheted view of following a small tributary we had spotted on our way.

We are in the middle of a horrendous drought at the moment. This turned out to be quite timely. As with all things. Timing is everything.

The first sniff that we were on the golden path was this puddle of water. 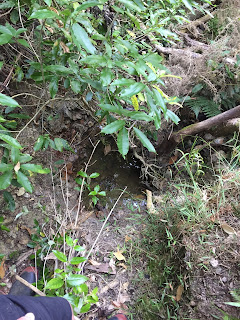 Gravity and fluid dynamics are curious things.
We found lots of limestone and very dry clay.
Eventually we hit the bottom. Some harder than others. I rolled my left ankle. A good Omen! No good adventure does not have a good challenge. 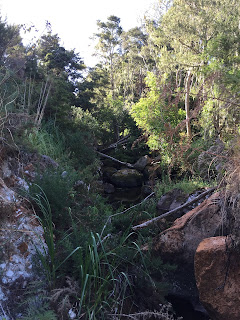 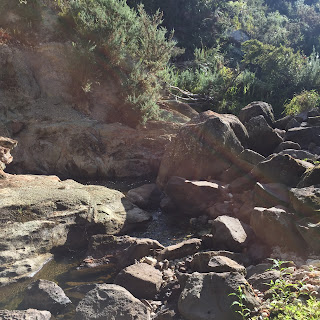 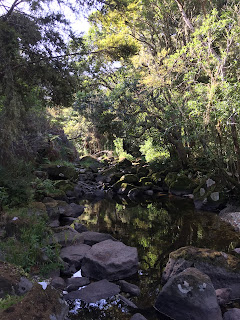 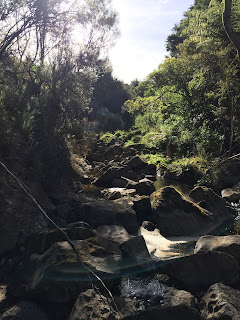 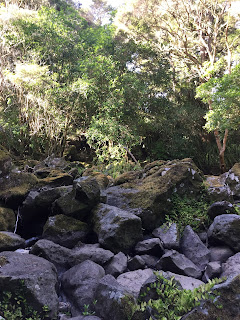 Some observations. The river bed has a very calm old feel to it. It will be impossible to visit in Winter. The moss lines on the largest rocks are 1-2 metres high.
There are some HUGE boulders.
As is the case with much of New Zealand you get the feeling not many humans have been down there.
Making this a useable space will be challenging. I do have some thoughts. One is to run a wire down the river bed which you can clasp onto when coming back. There is about a 2 metre drop at the bottom which we will need to smoothen out.
I foresee a further expedition. Where we attempt to find another exit point to the east which matches up with our eastern boundary.
Special thanks to my father in Law Steve Sangster. Some of this have known this for a while but with a Sangster at your side. Anything is possible!
January 17, 2017/0 Comments/by El Draco
https://theselines.com/wp-content/uploads/2021/05/Myriad-Lines-3.jpg 1413 2133 El Draco https://theselines.com/wp-content/uploads/2021/04/These-Lines-Logo-Slim-White.png El Draco2017-01-17 19:45:002021-05-06 00:30:37Finding your River

Life on a Dry Dock

From the Sublime to the Ridiculous

A couple of things
0 replies