So if I time this right you should be reading this on or around my birthday. The 25th of January 2017. I turn 40 this year. For the past year I have been putting my body through a form of punishment. I call this punishment operation Fight Forty.

Forget what everyone tells you. Forty is a big number. It is halfway in my books. It is also the demarcation point for middle agedness. Luckily my family is blessed with premature grey hair. I noticed this soon after getting married. After blaming this first on getting married. I then took the drastic steps of cutting all of my hair off at regular intervals.

There are so such short cuts for the body, so I have been doing my best to prepare for the eventual. I am bloody 40 now.

I am also a Dad. I was a Dad last year but having spent a lot more time with Dario and Anna. I think I am really a father now. Anna and Dario picked me up from the Airport on Friday the 13th of January. This was a very cool experience for me. We made our way home and I did my usual furious unpack and then found jobs to do until night took me. Intermingled with the jobs were many laughs and giggles with Dario. He really is a cool chap to hangout with. He already has the measure of us both and our poor dog Ruby has been demoted in the pecking order.

Shortly after landing and conversing Anna became quite convinced that I am suffering from memory loss. As I was not quite 40 yet. I could not quite blame this memory loss on being middle aged. Grasping for straws I grabbed my oldest and favourite. Jetlag. Can everybody remind me to quiz Anna at length of all manner of things when we complete our jaunt back to Europe later in the year? More about that in a later post. I might forget.

A week in at being at home Anna has gradually increased my time with Dario as to not shock us both.

The first morning we went for a walk together. 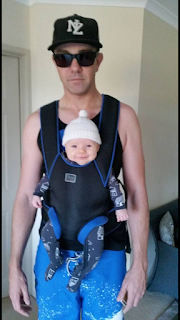 Notice how jubilant we both are. 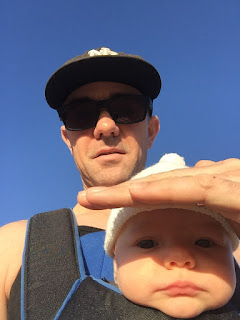 I make a good sun visor.

We have spent a bit of time working on jobs. 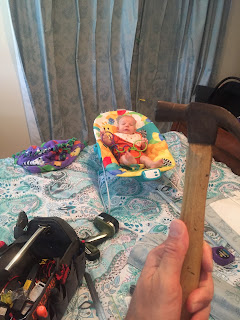 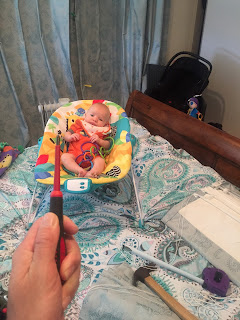 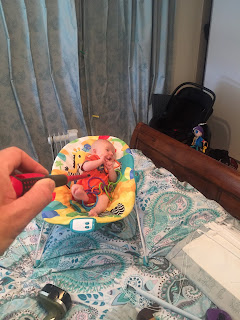 We have also spent time together with Mum asleep or out of the house. These have largely been good experiences. Although we did spend a WHOLE afternoon together last week which included a very traumatic trip to get passport photos all by ourselves. I do believe this was a shock to us both and we will never fully recover. Dario has started to grow grey hair. 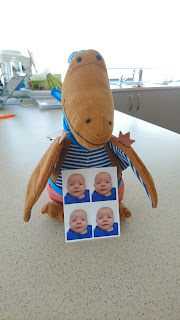 We did pick up a sweet Dragon though! He has a large D scarf under his chin.
Anyway I am enjoying the fresh pair of eyes to show things to. Short sightedness another genetic affliction….. Dario also has a keen pair of ears. We have been listening to Classical music amongst other things. Having a child is a great excuse to listen to Classical music. Something we should all do more of.
We are booked in to do some swimming lessons next month. We will keep on doing what we are doing. I shall be Forty and middle aged and will forget. Good thing we have this blog.
January 23, 2017/0 Comments/by El Draco
https://theselines.com/wp-content/uploads/2021/05/Myriad-Lines-1.jpg 1413 2133 El Draco https://theselines.com/wp-content/uploads/2021/04/These-Lines-Logo-Slim-White.png El Draco2017-01-23 20:15:002021-05-06 00:30:37The Middle Aged Dad Blog Blog

The Myth of the Runners High
0 replies