I am currently lying down in the Air New Zealand lounge writing. My Facebook starvation diet continues to surprise me. More about my 3 step program on the 1st of April. Zero Fools. 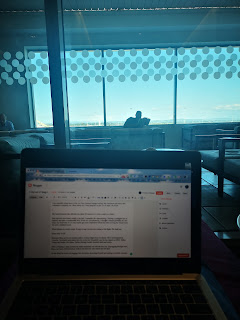 My travel itinerary has afforded me about 24 hours in LA with a night in a Hotel.

Past layovers have usually been a bit dull. I squander the opportunities. Turning a jetlagged cheek to tourism and onto a comfortable bed. Given my circumstances, I thought I should probably try and enjoy my brief time in LA and maybe get some inspiration which has been serving the Tinsel town for over a hundred years.

This is pretty much what I do when I want to achieve something. Welcome into my inner workings. I have added a bit of unnecessary tinsel to make it more readable.

What follows is a loose script. It may or may not survive cutting or the flight. We shall see.

Bemused Man arrives in America after a 12-hour flight from Auckland. He is interrogated by Customs. Invariably gets asked who he works for. Invariably says he has signed an NDA. Stifles Trump and border one-liners. Smiles through freshly brushed teeth and leaves.

After collecting a large suitcase he walks purposely out into the hazy air. Zigzagging through touts, buses and taxis. Determined to walk to the hotel he can’t check into till 3pm.

At the Hotel he leaves his luggage but not before descaling himself and putting on a fresh costume.

The Internet warns tourists from using Buses. Which is precisely why the bemused Man will catch a $1 bus to Santa Monica to be surrounded by tourists. Let it be known the only actor has a common touch when it suits him. He likes to think of himself less a tourist and more of a Universal Citizen.

If he hasn’t made a Busload of friends by now the Actor will probably try and get some photographs. The photographs will be utilised at a later date. The oddness of California should be displayed. This may take a few hours.

Hankering for some gluten-free Apple pie and a highly probable Burger an eatery is found. It may well be a Diner. It must have chrome, booths, a waitress named Beth and a Grill man who has served time. There will be an absence of high tension dialogue befitting a Tarantino film.

An important item must be sourced. The details of which must be kept secret from the viewers. It shall be wrapped in a brown wrapping paper.

A tacky fridge magnet (is there any other kind) shall be found.

Some libations shall be poured to this diety. Enough to spark up some conversation. In his experience, the New Zealand accent affords some adoration in American which is always welcome. Care is taken not to over hydrate on Libations

Depending on the outcome of the last scene the Bus may be swapped for a Taxi or an Ambulance (jokes) Feeling a bit more than tired it is time to retreat to the Hotel and rest for what promises to be a very ten days in Mexico.

And that is how I see my day in Los Angeles tomorrow. I look forward to sharing reality with pictures.

Hopefully, it is not a selfie of me sleeping.

That time we met Michael Barrymore

My Day in L.A Scroll to top