I touched down about 11am. I was bemused.

I do have to give America a bit of a bouquet as passport formalities were as smooth as I have seen.
The grumpiest border control person on offing took his time to have some chit chat with me which was not at all invasive. I must be oozing charisma from every pore at the moment. This might explain why I have been summoned back to work so quickly.

Eschewing the courtesy shuttle I plodded my way to the hotel. On the way, I paused to sit on some grass on the side of the road. The grass in California is something else. 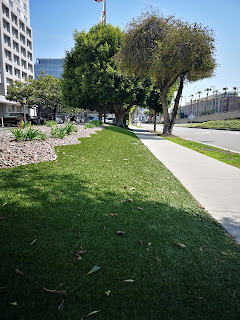 The hotel allowed me to check in 3 hours early. So after I performed some perfunctory travellers admin, I was soon out the door of the hotel and onto the adventurous Blue Number 3 bus to Santa Monica. Soaking in the business facades and the ever-present paradox of hybrids and gas guzzlers in the herd, I was soon on my feet near the pier. 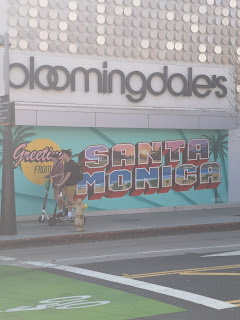 A plague of ride-sharing lithium bombs is dispersed throughout Los Angeles. I counted three conventional brands of scooters and at least two types of electric bike. These litter the footpaths with them. Some lying down with broken foot stands. As such riders are reminded to ride on the road or suffer.

After the relative serenity of my Bus. I soon found myself in a tsunami of tourists cresting over the pier. Which is funny as there are ample Tsunami warning signs all around this region.

It is a bit of an iconic stretch of promenade. 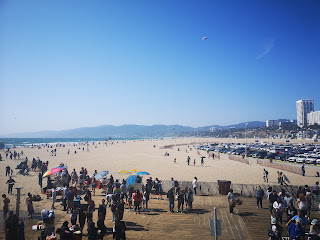 Not excessively enjoying this. I soon found myself Power-Touristing and walking about 12 kilometres all up. 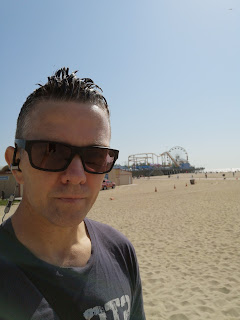 Some Pier. Some Dude 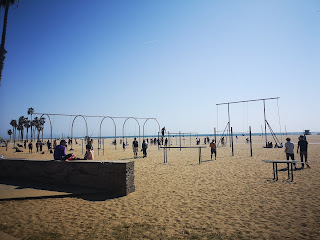 A distant relation of CrossfittusLooniticus
Awesome 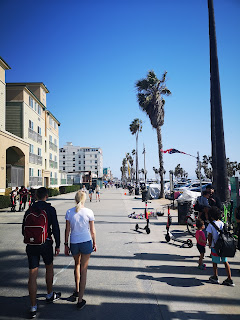 About to pass. I am not using my indicators. 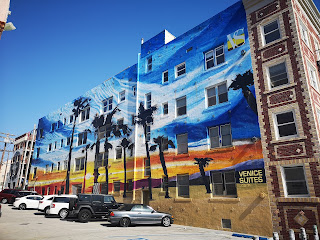 One of Hank Moodys old haunts 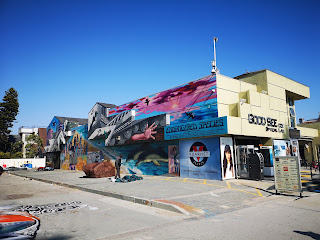 I found this very sad. 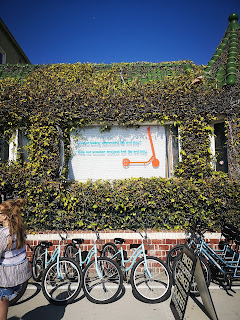 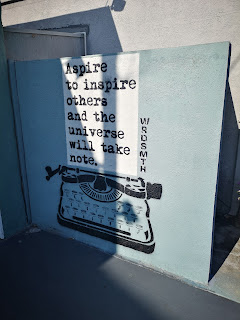 If you walk towards Marina Del Ray you get to see the Hippy, beachy kitsch evaporate and you enter some seriously sun tanned Hipster. Some of the locals have to wear futuristic welding helmets to keep UV at bay.

I always respect seeing tasteful Unicorns in a shop front. Less than 15 minutes before I had seen my first pair of rainbow suspenders since Mork and Mindy. 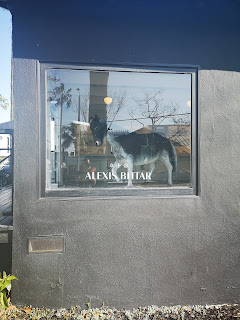 About now the 5-hour energy I had quaffed upon landing started to lose its effectiveness. It was about 5 hours later.

I guess if I was to take anything away from my walk today. Los Angeles has some startling disparity. Beneath the sparkling veneers there are a lot of fillings. The homeless are so prevalent they all have registered cardboard sleeping pads with the city municipals. It is heartbreaking to see.

I lurched back to my hotel. Ordered in some room service and wrote this.

I am about to have a long bath.

My earlier script didn’t really go to plan, a bit improv towards the end. But I guess at the end of the day. I do actually like my own company, I’m pretty good at it.

I did actually go downstairs later for libations and had some very animated discussions with a handpicked audience. We stopped just before a revolution.

I did have a moment in an extra long elevator ride. I am alien life form who calls them elevators. We stopped at a floor and no one got out or in I said very loudly when people were confused.
“the ghost just got out, he is staying in room 3108″
This got some movement and I do beleive I made a couple of tall brothers laugh out out. They the proceeded to join in SSH and promptly missed their own floor. My job was clearly done it was time to call it a day.

I do have supplementary tales however they are of a different tone (moan). I may have been exposed to a fatal amount of Boomer radiation in transit.

And the horse you rode in on