When you last left me I was making myself at home inside another dimension. Since then I have experienced the highs and highs of alien abduction. Parts of it were fraught with danger and I still do not fully comprehend sections of it but hopefully this passage will help me out.

Physically I have numerous wounds covering my body.

I now have a day of work ahead of me. I will update this entry later. Stay tuned……..

After a full day of work I have a fuller memory cortex to draw from.

At one point I was crash tackled off a man made structure by a curiously loud and strong female alien. This in turn damaged my back, leg and rear. I am hoping for a full recovery but I do not think ACC will take kindly to my claim description.

After a bout of getting to know the floor of the alien planet I was lying on. I stood up and put on the top half of my space suit. My left arm disappeared into the jacket and was promptly stung by a loud buzzing creature. If I had been on earth it may have been a wasp.

I was then joined by a very curiously dressed assortment of captives. We were promptly lead on a merry tail chasing expedition which was akin to a mad hatters jamboree. It even had mad hats. To this day I do not know what we were searching for. It was a herculean effort to find our point of origin. Never go walk about in a vacuum.

The sun soon rose. We were stranded in a large park like area. There were various activities and brain teasers. Most of the conversation lurched from feat of daring to another. The feats were so incredibly daring that there were few starters fool(hardy) enough to do them. It became apparent that not doing something life endangering would be sufficiently astounding.

I was stranded in an escape pod for a good chunk of the day. The pilot of the escape pod if he could be loosely labelled thus kept adjusting his dials and preparing for lift off. The lift off sadly never arrived. I think the pilot was stuck in a hole. Maybe he was a figment of my imagination. Maybe I was a figment of his.

The other travellers eventually entered sleeping capsules and retired. I did this and am happy to say that I felt almost normal after I arose. 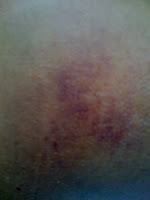 A part of me that hurts