It was with some trepidation we left the confines of Luang Prabang to find the fabled waterfalls today. Mother nature decided to indulge us in some forced precipitation participation(rain). The wife took some coaxing, but using my finely honed navigational instincts I was able to convince her that the waterfalls were directly under the small patch of blue sky in the distance.

So off we set a motley crew of ten French, Dutch, Japanese and Kiwis. Our driver drove an interesting diesel van. It can not rain here often, or at least it has not rained convincingly since the van passed its last certification in 2005. The drivers side window wiper was not functioning. When the drivers vision was impacted badly by moisture we would stop on the side of a road and hail a waiter to clean the windscreen. Service with a smile.

Our final destination was magical. Bears who would have been destined for the black market live in relative paradise and one of them posed for a photo. It was on the way to the water falls I noticed a distinct difference between Thailand and Laos tourism. In Thailand there are safety signs that no one takes heed of. In Laos there are no signs. What should have been a sedate walk to the source of the thundering falls took on a whole new dimension with the added rain boost. 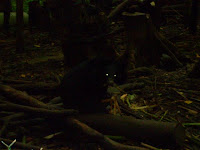 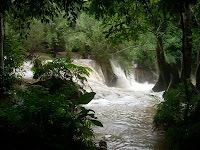 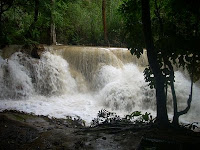 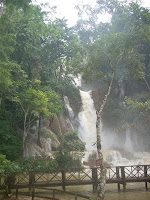 It was after the walk we happened upon two natives of Cairns, Australia. An inspirational couple who were on the Laos leg of a trip. After a shared dinner I feel a bit wiser and very content. Not a bad day. Weather, you like it or not.