Hue pronounced Hway is the historical capital of Vietnam. With a population of 340,000 and sitting astride the delightfully named Perfume river it is a welcome stop on the journey south from Hanoi.

Yesterday we took a motorcycle tour of Hue and the surrounding area. Small private motorcycle tours are recommended by travelfish and the benefits are obvious after taking one. We used Mr Phuoe and he was a fount of information, laughs and craftily drawn maps scribed in the dirt.

Rather than cheapen the experience with an exhaustive regurgitation I will share some of the insights gained and include photos where possible.

We have been lucky to hit one of the rice harvesting seasons in Vietnam. The full life cycle of rice was learned. Some mechanization has occurred but it remains a very labour intensive exercise. One of the things that I found interesting was the symbiotic relationship between duck farmers and rice farmers. Both benefit from sharing land use. The ducks are diligent stewards and are fattened at the same time. 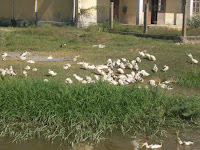 Our first real stop was a Vietnamese village with an interesting bridge. A childless mother commissioned the work of the bridge to bring her a child. She remained childless but became the mother of the whole village. The bridge had neat bench seats for relaxing and our guide was on hand to demonstrate. The bridge also serves as an informal meeting place for elderly men during the day, a place to talk, drink and smoke in the shade. 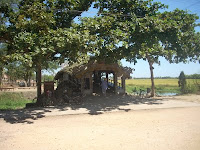 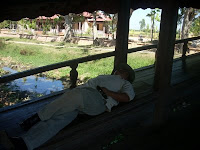 I have been missing seeing Buddhist monks in Vietnam. They are everywhere in Thailand and Laos. During the morning we learned that the Vietnamese follow a different flavour of Buddishm. Monks are monks for life and they only wear orange for praying and meditation. The rest of the time they wear brown. Often the first born son of a family is given to monk hood as it is believed it will bring good luck to the family. They also do not seek alms in the morning. 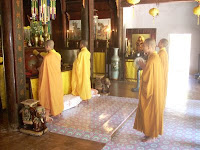 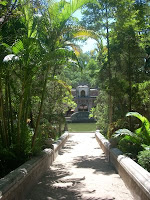 The four supernatural creatures of Vietnam are the Unicorn, Dragon, Phoenix and Turtle.
The Turtle gains his supernatural status by benefit of his wisdom. It is good luck to rub a turtle statue head. 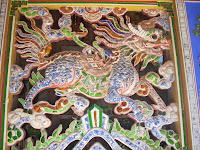 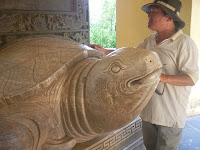 Mr Phuoe getting some free luck

Hue has seen its share of eccentric rulers. One character had 104 wives plus a suite of concubines. He also had a taste for Elephant and Tiger fighting. Not content with a fair but macabre spectacle the Tigers always had incisors removed and claws clipped. For royal reasons it was important that the Elephant always won. The Tigers still managed to cause havoc escaping rings of spear men and a carefully chosen island until the Tiger and Elephant arena was created. 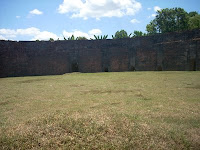 Learning about Vietnam’s various battles other than the American war was very worthwhile. As discussed earlier my knowledge was all gained from TV and film. Being on the ground and learning from a local is invaluable. 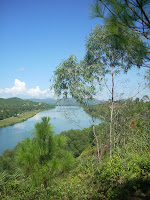 View from gun emplacement on south side of the Perfume river

Just a small sample of a day in Hue and the rich history Vietnam has. If you are going to do a tour in Hue take a motorcycle one. All of the sites we visited were free and we were finished by lunch time. Bus and boat tours are slower, longer and tend to stick to admission fee only places of interest.