This is a tale of decadent food, a road trip and an interesting Chef with a possibly undiagnosed mental illness.

We had survived a momentous journey to Pozzuoli, Napoli. Our friend had escorted us to our temporary home and place of work for the next couple of days. We were deservedly hungry and looked forward to the yacht Chef whipping something up as they like to do.

The Chef in question was from Argentina. I have not had many dealings with Argentineans in my life. Diego Maradonna I respected and then felt sorry for from afar and that is about it. This Chef we shall start calling Havenofear which is a cunningly disguised pun which both masks and pokes fun at his real name. He does deserve being poked fun at just wait and read.

The Chef was full of bravado and himself. He proudly told us that he was the Argentinean Gordon Ramsay. Interesting fact. Gordon Ramsay did try Super Yacht cheffing. He could not handle having a Captain in charge of him.

Havenofear turned up to the boat late. He had had a hair cut and some savage from Napoli had attacked his mono brow. He could not be bothered cooking but had a friend that would pick us up and take us to a fabulous sea food restaurant Napoli styles.

His friend arrived and six of us crammed into a VW polo and headed for restaurant. It was during the car trip I learned that Argentinean’s speak fluent Spanish and Italian. The stewardess from the boat was Argentinean as well so the two Kiwis and the Aussie in the back started talking about rugby or beer or something we have in common.

Being proud of my built in compass I did start to worry about the potential quality of the sea food restaurant when we were about twenty minutes from the sea. I think I started to worry about the Napoli Mafia restaurant scam that I should have read up about before we got in the car at some point as well.

Section of the car ride for your enjoyment. Still having issues rotating movies. Please tilt head 90 degrees. Think of it as a neck stretch.

It was with some glee that we finally spotted a restaurant and it was indeed our nautical cuisine destination. The restaurant was dead. We were the only customers. Its location meant it was unlikely to get much walk in traffic. It was probably good practice to have a family member scouting for customers.

What followed is with out a doubt the finest meal I have ever had the pleasure of eating. It was seven courses long. In true beginner fashion we gorged ourselves on the first dish leaving no room for the subsequent dishes.

If the French think they invented Sex. Italians surely invented food. They will go at great lengths to describe dishes in Italian even when it is painfully clear you do not speak it. Cook books and menus are all written in Italian you see. I am not jesting.

Off the top of my head we ate. 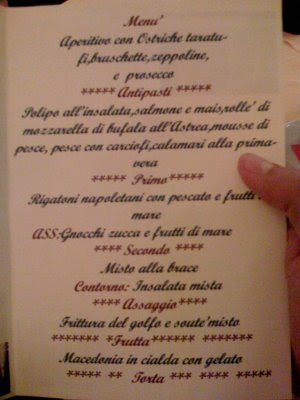 As I mentioned earlier we were bursting after one dish. Our waiter was informed and our dishes slowly started to get smaller. He seemed to have an innate ability to judge our relative hunger and kept the food flowing an an almost manageable rate.

Eventually we hit saturation point and we actually had to skip the meat section of the meal. I perish to think of the 300 kilo Marlin of other sea animal they had ready for us to sup on. It was a relief when the waiter bought us all out some fruit to eat.

No matter how full you are you can always fit in some fruit. It cleanses the palate and we thought we were safe. The waiter then snuck out this devilish Italian cheese cake which of course had to be eaten.

Then it was spirits time. Italians all enjoy spirits after meals, preferably with coffee. The coffee I have learned helps you to get off your chair. The restaurant gave us a bottle of limoncello to take home. Made by Aunty of course. 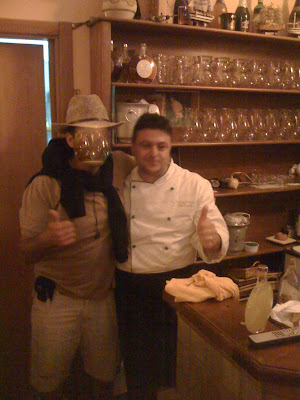 Havenofear skillyfully tampered with to protect his identity and more importantly our Chef for the night. Bottle of limoncello to the right.

It was a fantastic meal and I am proud to have attended such a great restaurant. Now some of you might think I have given Havenofear a bad rap. He did organise a great meal for us. But you see I am writing this story for our good friend who has to share a cabin with him.

Havenofear has been burning the candle at both ends. He was not pulling his weight and on the day that the charter guests were to arrive his galley was a complete mess. He had not slept all night, had gone to bed and locked the door.

With no way to wake him I did suggest the engineers solution.

Disconnecting the air-conditioning from his room..

Engineers are the most important people on any boat in my opinion. If the boat don’t work. No body does.