I like the facebook tag name feature. Now I can not simply tell Uncle Phil and El Fuerte to read my blog. A tag is the best I can do. Doing this rescinds my previous claim that I was sick of Facebook butchering my RSS. I am on the verge of paying for a new blog PR plan. PR savy people are welcome to schmooze me with a pitch.


This letter will have a lot of in jokes. These jokes are self indulgent. Self indulging is very important. Omnipresent entity knows I am in need of some self indulging

I really miss you guys. Things have just not been the same working without you. I have hidden behind Lamborghinis and hard to read English books. But the sadness and emptiness is self evident. Let me list the things I miss.
-Manically laughing about aids
-Words of the day
-Our many work placed RSI prevention mini break spots conveniently out of CCTV coverage
-Listening to Filip rage about everything
-She’ll be right
-Keep your shirt on
-Mitch Mitch
-Almost dying on the way to the Gulf of Aden, shame you were asleep Phil
-That time David almost kicked a fender to China
-The breakfast of champions incident
-The many and varied shit talking sessions that seemed to last for days(they did)
-The endless explanations of what irony really is
-Watching football
-Kaitaia Fire
-Hose Hero
-Uncle Phil always finding time to pose, with a pole somewhere. Sometimes at least five times a day. Witness. 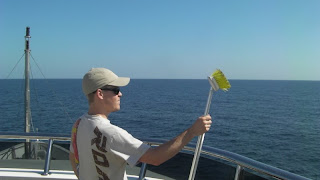 -Talking up David’s violent, crazy tendencies which were not there but were worth going on about (for days on end)
-Getting shit for wearing shoes on deck always
-That time Uncle Phil lost my torch
-Frog dancing!

I could go on for months but you get the idea. So many cool memories and I miss making them with you.

You bastards better miss me!

David, when are you going to be Captain on a boat that needs a couple of good looking Deckhands and a blonde kiwi girl to get us beers at lunchtime on Fridays because Spanish boats pretty much don’t work on Fridays ?

The past year has been really fucking hard. I have had to live months without my Wife. I have been for the most part 12000 thousand miles away from my best long term friends and Family. I have made some really amazing new friends that have all sailed away. I have struggled with the very real actual physicality of holding a chamois, window squeegee, ropes and leatherman for at least eight hours a day.

On Friday night, I decided with Anna a new course of action for the next couple of months. It should be a reinvigorating skin shedding metamorphosis worth of a Dragon. I think it is well deserved.

He Stopped the Dance

Life on a Dry Dock
0 replies