Forenote (i have gone quite wild with parenthesis in this post. This could be a new fad or an annoying (b)racket)

Leaving St Thomas and the discarded toenail of America behind was a good feeling. As much as I love quality baseball caps, all you can eat meal deals and Radio shack. St Thomas feels a bit off, a bit forced and a bit ugly if you are not in the thin coastal strip that surrounds the scarier part.

Antigua promised to be more of the real Caribbean whatever that was. Sadly about two hours into our passage I discovered my Granny had passed away. This was a shock, as discussed earlier and I could not wait to see land.

Antigua has a chequered history. If you play Pirates! extensively you discover Pirates were forever attacking and overthrowing Antigua along with the French, English, Spanish and Dutch.

The history started at the end of our gangway , we tied up in Nelsons dockyard. That’s right Admiral Nelson of the British navy was stationed here for a couple of years, you might have heard of him.|

What did we do in Antigua? Well there was a boat show to get ready for so we did a lot of cleaning and detailing and other work stuff. The boat show was a big drinking swill fest and junket for a whole bunch of Charter brokers. I think I have shared my musings on brokers before. I do not have much more to say about them other than it would be a wise idea to run a hot air balloon festival here at the same time given the vast amounts of heated gas heading skyward every second.

Photographic evidence of how awesome brokers are. 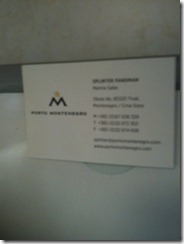 On our first day in Antigua Anna and I ventured out to do some provisioning(shopping) . We had what was to be the first of many very eccentric taxi rides. If I was to sum up Antigua it would not be the 360+ beach Island (which it is) it would be the island of many vivacious and extraordinary taxi drivers. Our first taxi driver was a self styled island ambassador. He knew everyone on the island and was happy to stop frequently to chat with them. He was also quite fond of singing and freestyle rapping. I do have 24 seconds of his freestylin which may or may not make it online at some point.

After talking with some of the people who have decided to make Antigua home I have come up with the conclusion that Antigua is a magnet for the disenfranchised and skewed. A refuge for the daringly different as it were.

On our first Sunday here we went up a hill with an eccentric taxi driver to a place called Shirley Heights. Situated in a national park on a Sunday night you can have a BBQ, listen to live Reggae and Calypso music and generally have a great time. They also had some devilish rum punch which may have had some added witchdoctor spices. 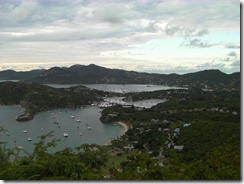 Once the charter show started there was not a lot of time for sightseeing. I have been very restrained since coming to the Caribbean with regards to partying. I have a self enforced curfew of 12am and I have a few rules for going out.

These rules have served me well and I am happy to say I felt positively super human all week during the charter show and into about two hours of our Sunday adventure.

Late last week James(James is quite a character and rest assured his personality and history will be explored in a crew profile soon), the other deckhand and I decided that we should hire a sailboat for our day off. Dedicated readers will know that my last sail boat excursion was not particularly memorable or in fact clever. I was determined to see things right.

On Sunday morning half of our motley crew assembled in the mess to go sailing! All of the crew except for Anna and I were in various states of drunkenness and hangover. We corralled everyone into a group and marched them to the next marina along where we would collect our sailing yacht. The safety briefing was quite simple and a bit shocking. There were three pertinent points. One of which would haunt us, The gearbox bilge was leaking.

With our briefing out of the way we were soon motoring into the wind on the way to Green Island. Our hope was to sail home with a favourable wind and live the WAFI dream. James was a very good instructor and was soon telling us important information and showing us how to drive a sailboat with our feet and look the part. 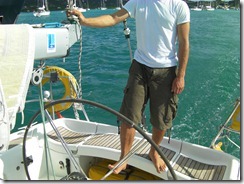 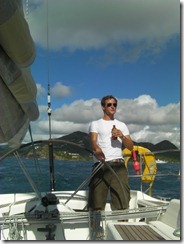 It took us about two hours of motoring to get near Green Island. We had to go quite close to some reefs and James decided to slow the engine down. We then had engine failure and learned how to sail a boat very fast. It is amazing how quickly you can learn how to sail when you have drunk a few Gin & Tonics and there is a reef close by. Any scientists that want to pick up that hypothesis I am happy to float some evidence your way.

Under James’s tutelage and gentle coaxing we soon had an anchor down and were enjoying the pristine waters of the Caribbean and not worrying about our engine at all. James rigged up a swing out of some rope and we were soon swinging into the water with wild abandon. Sailboats are full of rope and wild abandon

A tender came out to see us from a handily close restaurant and we decided to jetison our sailboat and go to a fancy restaurant. 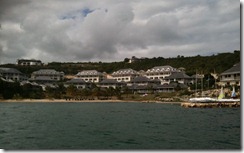 This is something guests do all of the time so it was nice to do it on a slightly less grandiose scale. The restaurant was memorable, it had an infinity pool. 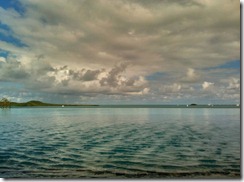 Fed, watered and a bottle of wined we retreated back to our sailboat we had abandoned to engage in some more swimming, drinking and a bit of snorkelling. Our engine was now working and we would be able to motor past the reef and sail home. We soon discovered that although our engine was now working our gearbox was not and we could only manage a lazy reverse. After some phone calls to our hireage company it was decided we would try and sail home without any engine. We then found that our anchor winch was not working. Hauling up an anchor for a 40 foot sailboat by hand is not something I would recommend after quite a lot of Gin & Tonic, some prawns, chorizo, steak and apple pie. Oo and two glasses of wine and a coffee to wash it down. We succeeded in hauling the anchor. I then made a substantial impromptue offering to Neptune.

The sail home was short lived. By now James had discovered that his crew were getting a bit tired and his commands were not being met with the same snap as before. Quite a few of his orders were being miss heard, or not done at all. We turned around and went back to our anchorage. We would radio for help. It turns our our radio was only a one way radio. This is not desirable in a minor emergency. James got on the phone again and the hire company promised to send a rescue party.

Another sailboat sent a tender to check up on us. He had been watching our antics and was very impressed by our sailing off and doubling back and knowledgeable looking crew. He also had a very wry smile. After some more anchor hauling and a bit of a push we had the Sailboat in a better position to abandon. Hopefully help was on its way.

Help did come and we were soon in a taxi heading home as the sun set. Not quite the way we envisaged our trip home but we did get to sensibly abandon that problematic sailboat and had a great laugh as well. There is some huge cataclysmic irony in that the two times I have set foot on a sailboat I gone from incredibly sober to incredibly unsober and vice versa.

We have now left Antigua and are heading towards the promised land, Saint Martin. Saint Martin is a fantastic place to be if you are a Super Yacht or crew member in the Caribbean.

2 Weeks till Blast off