An extended period at sea has given me plenty of time to ponder many topical subjects that have entered, mutated and vacated my mind tropically.

My first thoughts have been that whilst the rocking motion of the ocean is a calming influence it is completely crap for writing upon. Time and time again I have picked up my laptop to finish and start various  tomes only to be distracted by the mountainous DVD library aboard or the mountains of unfinished ice cream. For this I offer condolences, please click the Google ads to help pay for my blogs funeral.

Given the nature of this voyage this passage will boldly jump tenses so I apologise to all of my English teachers past and present.

Now my clever worded public service announcement is out of the way let us get on with the very exciting business which was my first Atlantic crossing.

Our Atlantic crossing was undertaken in three sections. The first section was from Barcelona to Gibraltar. I was quite happy to see the backside of Barcelona. It is a city of crime, and drunken sailors are an easy target. I do believe we had four phones miss-placed in Barcelona.

From Barcelona we sailed perilously close past the island of sirens Ibiza, sadly no mermaids swam out to waylay us. I think I saw the faint glow of a million inert disco balls.

I am not sure what I expected of Gibraltar but what greeted us was not it. Surely there was a big rock and the fuel was tax free so why did I feel short changed?

Leaving Gibraltar for Tenerife we were incredibly lucky to have a fantastic omen. A huge pod of dolphins swam in the wake of our bow for half an hour or so. Sadly I did not take any footage, but the memory is a very pleasant one. Atlantic ocean dolphins are very large and splendid animals.

It is here that I can share one of my extra responsibilities for this voyage. With my freshly gained engineering qualification I have been doing an engine room watch in conjunction with my navigation duties. Now, being me, I am the first to admit my mechanical knowledge is somewhat limited. What I do have is an innate ability to sound knowledgeable on almost any topic, very useful in an engine room.  Luckily my engine room duties just require me to be vigilant, read some gauges and help out where I can. I am learning a great deal and it is making time go a bit faster on our journey. 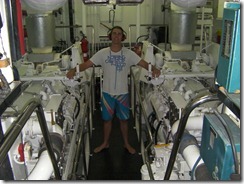 Here is an awesome photo of me with the twin awesome Caterpillar D399 engines. Notice I am not wearing shoes like all great McConnell engineers. I am however wearing ear muffs.

Tucked in off the coast of Africa are the Spanish Canary islands. They are volcanic and if they were erupting it would be handy to have a canary in a cage. We pulled in to Tenerife on a Saturday night with the promise of more fuel in the morning. The crew were very thirsty. I had the nervous twitching associated with a heroin addict in withdrawal. I had not had internet for two days.

With the crew safely watering at a bar I ventured into deepest darkest Tenerife in search of an Internet cafe. I did not find any. What I did find was a gambling den with one of the most frightening sights i have ever seen. 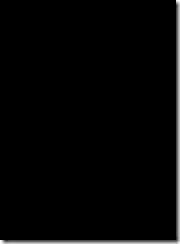 With this ghastly patrons visage burned into my retinas I took solace in five or so gin and tonics. On our way back to the boat we were dismayed to find the entrance to the port locked. What followed was a very safe, quiet and mad cap adventure. I can not stress how safe and law abiding it was. Thanks Captain Jack. (more about him at a later date)

Leaving Tenerife we started the real grind of our trip. Nine days at sea towards the Caribbean. More so than any other trip I have been gobsmacked by the enormity of the sea and how terrifyingly empty it can be. I have to do deck rounds in the middle of the night and I constantly think if I was to Fall or jump that would be the end of me.

Morose? Probably not as morose as the ghost we have on board!! Boats are by nature noisy things.  If you are wandering them jn the middle of the night you could be forgiven for hearing a few odd noises. That is why I was mildly startled to discover our Captain believes we have a ghost living with us. Good to know I guess. Luckily he is a friendly ghost, believe me you would not want an unfriendly ghost sharing a cabin with you.

Hmmm what else? Well I have to say I am rather fond of the crew. We are all a happy bunch. I am making mental notes and will do some crew profiles as soon as time and people permit.

One of our pre departure drills is a stow away check. Stowaways are a very real part of shipping and an opportunistic person seeking asylum or adventure might get a free ride to another country. We have had two stowaways so far. One was a garden variety bird who stopped a night and flew away. The second was an ocean going sea bird with a gammy leg. He stayed a couple of days and vanished in the night after refusing to eat a flying fish I found on deck for him. I was hereafter named the bird murderer who probably threw the bird off in the middle of the night. I did not, knowingly kill the bird.

Photo of Birdy bird(I named him that). Flash off as to not disturb his rest. 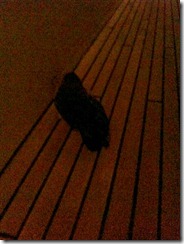 A few days later and all of the crew are starting to pine for land. The daily grind at sea is becoming more than a grind. We have not seen another vessel for days. Thankfully our ice cream stores are being replenished.

It is here I must comment on the stand out cooking of our two Chefs who have been rotating an excellent arsenal of food for us to eat. Meal times are something to look forward to. In the last week I have eaten, tuna steaks, beef wellington, prawns, chocolate fondant, cheese cake, tiramisu, chocolate brownies, berry muffins, chocolate mousse cake, a  berry crumble and a cooked breakfast every day.

The middle of the Atlantic is an incredibly large cloud factory. You can actually see large columns of water being sucked up into the sky, muddled about and viola clouds everywhere. Sadly again I did not have time to take many photos. Too busy being cool. 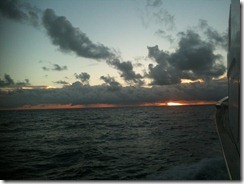 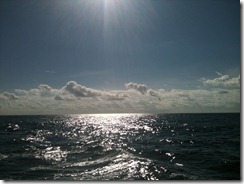 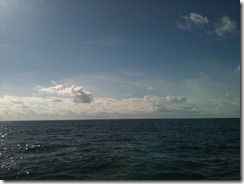 Want more? Well the last two days of our trip were very painful for me. Let me tally the pain.

This was all bought about by scrubbing the decks. There is nothing romantic about swabbing or scrubbing decks, especially when the boat is moving in the sea. Can you hear that noise? It is an ambulance with a siren that sounds like a violin.

We are in the British Virgin Islands now. First impressions; it is very hot and there is a lot of reggae, sun and smiling people. Choice. 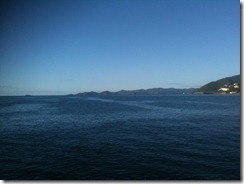 The increasing importance of soft toys

The Virgin Islands, British and American Scroll to top