Counting Ibiza & Palma, driving across Spain and last year in Barcelona I have lived in Spain for about two months. The difference this time is that I won’t be moving cities every couple of days, holidaying or living aboard a boat. I also shouldn’t be drinking a mojito every day like I was in Ibiza. Spain remains nicely different and endlessly friendly. As always with a protracted amount of habitation it is the little things that stand out and not what you would automatically think. Fittingly I like to call these tapas moments.

The people of Barcelona speak a dialect of Spanish called Catalans. I had a lengthy discussion with a French expat last weekend and she described Catalans as a sped up version of Spanish where words are truncated or just left out all together. To the untrained ear it sounds like everybody says mojito a lot. Maybe it is just our shipyard people. Maybe there is a guy there called mojito. Maybe hurry the hell up in Catalans is mojito?

Thanks to some networking I have the phone number of an American English teacher who teaches Spanish as well. What makes these language lessons very welcoming is that she likes to teach Spanish in bars. By ordering drinks from the bar tenders and interacting with the patrons one learns Espanol in a very relaxed setting. I will probably say mojito.

Did you know Robin Hood was from Barcelona? He actually probably wasn’t, but the relaxed apologetic attitude that Barcelonians have towards theft is quite strange. People will gladly tell you to move your bag closer, or keep your phone out of sight but the criminal element is very much tolerated. No one is telling the thieves to stop stealing. My new chief stewardess had her phone stolen out of her hand on Saturday night whilst she was talking on it. Surely there is CCTV here. Surely somebody cares! bicycle salesmen and phone shops do a roaring trade in the mean time.

Barcelona is famous for the stunning architecture but there are also small design choices that are unique. There seems to be a very accepting attitude to people sleeping in public over night. Park benches are comfortable looking. Subway vents heat cold spots. It even looks like stairwells going to underground car parks have been designed so you can have a windowed spot on the ground that sleeps two.

I joined a gym last week and the first thing that greeted me when entering was a large and prominent advertisement for a local beer. The interior of the gym was cavernous and vast sections overlook the Iberian sea. This is all quite distracting, thankfully there is a large cafe/restaurant which is just as busy as the gym and sells that beer they have on the door. I have seen a strange style of swimming here that has to have been designed. It requires lying on your back and kicking sporadically, as you start to sink to the bottom you should rotate both arms simultaneously in backwards circles. It looks incredibly difficult and counter intuitive but I shall try my best to replicate it as soon as I work out how to get to the pool. The final insult is that my gym also has an art gallery inside where you can buy art after you have had a few beers and almost drowned in the pool.

I am working with a few Argentinian’s who have been dubbed the Mexican Mafia. They are interesting fellows and once they have the measure of you show quite wicked flashes of humour. Naturally I find myself joking about with them a bit and here are some of our exchanges.

Mario is the second member of the Mexican Mafia. He was quite vocal in showing his displeasure at the way the All Blacks bundled the Argentinians out of the RWC. I felt remorse and consoled him telling him he should be proud of his countries achievement visualising him crying at home wracked with anguish after watching the game with his fellow country men. I should not have worried. Five minutes later a South African sat down beside us(South Africa were also put out)

Mario: hahahahaaha you lose!
SAFA: Shut up
Mario: hahahaah you loser
SAFA: We scored more points than you. Did you even watch and support your team?
Mario  No

Echoing my time starting out as a deckhand I have been largely working solo for the last two weeks. Whilst this is not ideal it is a good way to learn as you make plenty of silly mistakes and tend to make them only once. As a reward for my valiant efforts I was gifted the third member of the mexican mafia, Martin to work with. Martin is an endearingly cheeky young chap who speaks about three words of English. We have managed ok with a combination of hand signals, cowboy Italiano and shrugs. I naturally do not use ladders unless I really have to. I know Lungo is Long in Italian so with a bit of bartering I have been named El Largo Kiwi. Given some of the names given to other crew members by the Mexican Mafia I have done pretty well for myself.

Embarassingly and also quite sensibly I have eschewed almost all forms of the nightlife that Barcelona is renowned for. I did venture out for a crew dinner last Wednesday and was impressed by a few things. Firstly the restaurant we went to had people giving head and shoulder massages before and after your meal.

After being coerced to have a couple of drinks on the way home I was loudly ushered into a taxi and went as far away from home as I have been in Barcelona. We ended up in the shot bar. The shot bar only serves shots which I think is a great idea. I have learned that drinking shots by themselves is not that dangerous. It is when you are also drinking rounds along with or between shots that it gets a bit skeweth. This bar handily had the entire menu painted on the wall in case you had momentary reading problems. 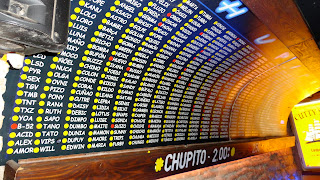 Finally turning in the right direction I started going home. We ended up in a rock bar which was very exciting. Spanish people love to grow a lot of hair and rock out at the drop of a guitar pick. This rock bar was decorated with well, take a look for yourself. 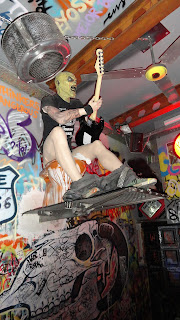 That is Barcelona so far. Despite myself I have been having quite an interesting time. It might be time to actually start looking for points of discussion. Till next time. 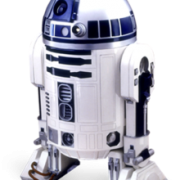 My Kingdom for an R2

The Legend of El Fuerte Lives on

The Problem with Leaving…
0 replies