I do not think words can adequately describe the climate induced shock that Qatar renders so efficiently on a foreign body but I will try. You know that feeling you get when you open an oven that has been roasting something, or a hair dryer about to explode? Well that is what greets you every time you venture outside. Currently we have a low of 32 degrees and its hitting 40 degrees during the day. Americanos that is degrees Celsius. I am very thankful that my job allows me to be inside most of the time. I did have the pleasure of removing those cameras I was so enthused about a couple of months back. After a few hours outside I realized that my brain malfunctions at elevated temperatures. I actually become a bit hoha (crazy).

Inside I am less crazy but a bit starved for inspiration. My apartment looks out across a building site and a busy road. With no real public transport, footpaths or climate encouraging alternative transport the roads are perpetually busy which allows for a hypnotically distracting vista. Thankfully I have my laser to fall back upon when the road is obscured by nightfall or sand.

On Sunday I went on an expedition to get my blood tested, chest x-rayed and blood type for residency purposes. Being one of the older crew members I went with the Chef and Chief Steward. The experience was mildly harrowing. The queues and efficiency shown were somewhat soberly akin to a concentration camp. I left with a little less blood an the only anomaly found during my chest x-ray was a nipple ring. My blood type is A+ and I was a little gutted that nothing stranger turned up but given the circumstances it was probably just as well.

One of the Deckhands and I have bought Badminton rackets. I take great lengths to educate anyone and everyone that Badminton is the fastest racquet sport and anything else is just a waste of time. Sadly Qatar for all of its infrastructure only has two Badminton courts and they are always busy. That has not stopped James and I playing freestyle hot air Badminton downstairs in the very large car park. We do not have a net but our efforts have not gone unnoticed with a crowd of three people watching us play on the weekend. The hot air and abundant concrete make for a very challenging venue which will only get better once we get some blue tape down to mark out a court and erect a net made from purloined materials.

My flatmate bought a shish-a for use in our apartment. Having not indulged in a conventional shish-a before I approached the device gingerly at first. After a few sessions I have grown quite attached to it. It has a football theme which makes it infinitely more entertaining than real football. I must confess to watching the second half of Italy versus Spain. I guess I am more Spanish now than Italian as I was supporting Spain before I fell asleep. 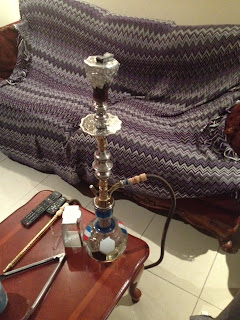 On that note it is time to sleep. Only 12 more of those until my wife arrives. Yippee.