I am yet to see an amphibian carnivore relic from 200 million years ago, but I have seen a lot of the footwear that share the same name. Crocs are much maligned shoes of questionable durability and certainly do not flatter the feet. However yesterday we went on a mountain trek and our main guide wore a pair of them. He treks three times a week and it is blindingly obvious benefits of crocs are

Our trek was charming. Our party consisted of one trail blazing Korean, a lady from Manila, Anna and myself. We had two Laos guides one wearing Crocs and one wearing jandals. The croc wearing one was the same age as me. He had spent most of his adult life working in a copper mine and by good fortune had started working as a guide for the last 6 months. A good example of how tourism benefits developing countries. 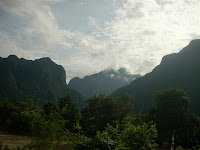 Our first hour of walking was meandering through rice and corn farms. The first bridge we crossed was the worst. It was a bamboo and wire contraption of dubious quality. It had the endearing quality of tilting at the worst possible times. It also had several large holes. Still I have a new found appreciation for bamboo. It was after we had crossed the bridge our guide told us that the bridge had collapsed recently and 15 people had fallen into the river. These little timely reminders were a hallmark of our trek. I suspect our guide will end up working in public relations, he had an uncanny ability to deliver bad news. 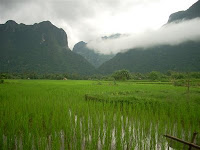 Up through a mountain pass we ambled. Recent rain had rendered our path very muddy so it was slow progress. We had time to learn about various critters. Danger ants were to be avoided. I suspect they are also known as army ants. At times I felt like a large rhino as most of the guides warnings came too late. I did manage to destroy some thorn bushes and tenderly remove some loose rocks and branches. Subsequent rhinos might find the trail easier work. 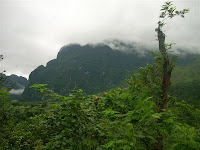 Over and down into a valley we headed to a hut for lunch. The hut was surrounded by a small herd of cows. Kebabs and fried rice were dished up and I asked our guide about a large sign with a predominant price. 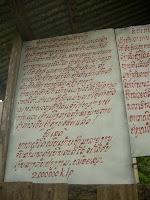 Translated it means; if you steal any of my cows and sell them at the local market you will be fined 2 Million kip.

After lunch we headed up the valley to the water fall. Physically this was the hardest part of the day. Incredibly slow and hard progress. It was with some relief we heard the comforting roar of the water fall. We all had a swim, both of our guides jumped 15 meters from the top of the waterfall into the pool. Sadly I did not have any crocs or jandals handy and could not join them.

Refreshed we headed back down the valley. Half way down the hill we heard a loud shot ring out. Later we were to find out that the surrounding hills are a popular pig hunting spot. The final stage of the trip was going under the mountain pass through a large cave. Before we entered the pitch black water in the cave we were asked if we could swim. At times we were walking through waist deep water. It was after the deepest part of the water our guide told us of a python that had been living in the cave a while back. 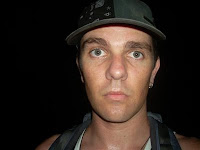 Actual photo of me directly after this news.

The rest of the trek was very pleasant. We continued to learn new Laos words and quizzed our guide on all manner of things. For example the small platforms that found on the side of every rice fields are for farmers to sit with torches to scare away mice at night.

We are now in the capital of Laos, Vientiane. We will spend the next three days organising our visas for Vietnam and the next stage of our trip.

The next chapter
0 replies