Last year I smugly wrote a list of hard earned tips in a valiant effort to engender happy and safe travel for the less frequent flyer. Little did I know I would soon be turning the world upside down for my immediate family. Following is 40 hours of calamity. And some tips.

Dario turned five months old on our day of departure. New Zealand was in the first stage of a biblical flood. We were due to depart at 5:45pm but knowing a little bit about cancelled flights out of Kerikeri we made a call at lunch time to try and get on an earlier flight. If the earlier flight was cancelled we would be able to make our connecting flight by hopping on a four hour bus ride. We would not have this option if the later flight was cancelled.

The bus ride went pretty smoothly but this extra four hours of travel probably broke us all towards the end. When we got to the international terminal we unloaded 12 pieces of luggage and set about checking in. Some sweet talking was required here as I did not have my usual Seaman luggage allowance. It was towards the end we realised we were missing the lucky 13th piece of luggage. Dario’s suitcase. Knowing the bus had to drop passengers off at the Domestic terminal I offered to run after the bus.

Personally I find running a positively futile and unrewarding pass time. Have you ever seen a runner smiling? Given my recent river injury, running to the terminal was probably the best and worst thing I could have done. After almost dying from a heart attack I made it to the terminal and located the bus, only to find it empty. The nice people at Air New Zealand had our bag inside. Sweating and swearing I calmly dragged the bag back to the international terminal and we completed checking in. Travel tip one. When travelling with over 80 kilos of luggage and a family have a luggage muster list which you can count up to before leaving any luggage assembly point. Include the baby in this list and your partner.

Marvelling at the speed and efficiency of New Zealand security screening I managed to leave my Traktor S8 and passports with security. So many plastic trays we filled. We discovered quite a cool parent lounge which is off towards the Airline lounges on the same floor as security. It has private rooms and a small rubberised pen for toddler containment. After a nappy change(not my own) we recovered the Traktor and passports and we were soon on what was the longest flight in the world(last year). Auckland to Dubai.

Dario had a bit of trouble during take off. The A380 accelerated a bit faster than our Citroen and we started rising a lot faster than his jolly jumper. He was soon crying and it took a while for him to settle into a sleep. He did sleep for his usual amount which turned out to be his last proper sleep of the whole 41 hour journey. I slept as I always do on planes, Anna not so much. Upon arising for breakfast service I realised that my bout of running had rendered my flight swollen feet practically useless. Travel Tip two. Avoid running at all costs on the day of departure.

Discussing infant flights with a few colleagues it sounds like Flight attendants are very well trained in placating and making a fuss of babies. We can vouch for this. Dario made many friends on board planes. 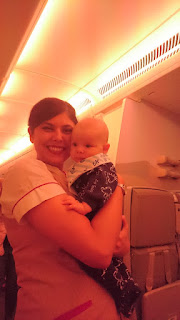 Upon reaching Dubai we were soon struck with the gravity of the trip we had undertaken. The best way to deal with gravity was to put Dario in a complementary push chair. 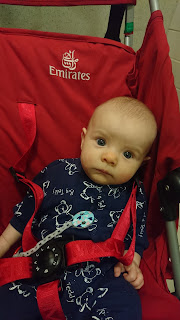 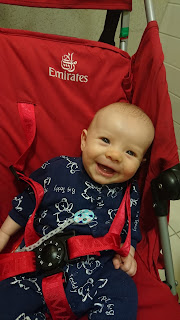 My ankles had swollen with the flight and I felt disturbing sensations in my feet. I soon realised this was from my run of the ages after the bus in Auckland.
Emirates ground staff kindly gave us first class tags so we could clear security through the priority lane. The X-Ray screening technology is so sophisticated you do not need to remove any liquids/laptops/batteries from your luggage. Are you reading this TSA?
After a cocktail and breakfast stop we were soon on our way to Spain. Dario struggled again with take off and a nice lady in our seat block befriended him. She was soon babysitting him and I am convinced would have quite happily taken him home with her if something had befallen us. 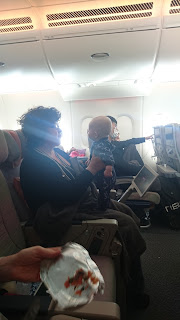 It is here I must give mention to one of our more worth while purchases. A backpack/front pack baby carrier thing. Without it the priority passenger would not have slept at all after the first night. The bassinet was too bright and we were situated near a toilet so he found it too hard to fall asleep in.
Spanish passport control was a formality. Baggage claim took a little longer than we expected but this because we had a car seat and push chair. These travel on a special carousel with artwork and commercial goods.
Now, my law of long distance travel is the last bit is always the worst. We had a four hour lay over in Barcelona. Our little jet setter had only been cat napping since our First leg to Dubai and was a bit over the whole exercise. We set ourselves up in a courtesy lounge, I highly recommend this also if travelling with a baby, Anna could feed him in a nice quiet corner and we fortified ourselves the best we could without missing our last flight.
The last leg was an ordeal. We sat on the runway for a bit too long. We were soon all sweating, screaming and suffering the uncomfortable imagined withering gazes of other passengers. A little longer and we took off. Screaming gave way to snoring and 45 minutes we landed in Palma.
Our taxi driver was a bit put off by our amount of luggage. He was probably more put off by our Englishness. I blame this firmly on the four hour layover in Barcelona. Free Gin is not going to drink itself. After some negotiating and showing him how he could fit us all in his car we were soon off to our new home. More about that soon.
Forty hours of travelling complete.
Travel Tips
Have a muster list for passengers
Have a muster list for luggage
Avoid Running at all costs
Have a baby carrier front/back thing
Use pay lounges where possible
The last leg will be the worst
A baby can be a VIP pass
Fly to Spain
March 19, 2017/0 Comments/by El Draco
https://theselines.com/wp-content/uploads/2021/05/Myriad-Lines-3.jpg 1413 2133 El Draco https://theselines.com/wp-content/uploads/2021/04/These-Lines-Logo-Slim-White.png El Draco2017-03-19 08:43:002021-05-06 00:30:36Long Haul Baby Hauling a Novice Guide

The most useful thing I have learned this month
0 replies