Edition. Jumbo because it has been a few days since my last entry and there was a large log protruding from my back. We have returned to the safety cocoon that is Chiang Mai and it is safe to write again.

On Wednesday and Thursday of last week we threw ourselves at Angkor Wat. Being a still (practicing) magician it felt odd to be paying someone else for mechanical levitation but Angkor Wat deserves everything you can throw at it. $15 was a reasonable price and the balloon ride offered a superior vantage point. Equally as important were the rich cacophony of Japanese voices and cameras sounds from our fellow balloon riders has prepared me well for my eventual conquest of Japan. 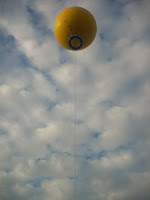 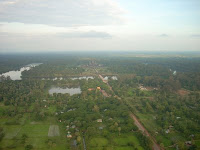 Early on Thursday morning we arose before the mosquitoes and were at the gates of Angkor Wat before dawn. Mother nature did us a great service by stalling a mass of photographers waiting for a sunrise and my wife and I had merrily gallivanted all over the premier temple before the snappers had discovered there was going to be no superior sunrise photo opportunity. Angkor Wat is an incredible masterpiece. It actually feels weird to bentrying to write about it. Needless to say my own personal plans for a self styled monument now seem incredibly mundane and humble. 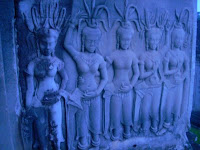 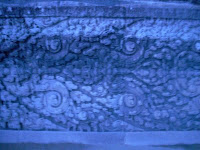 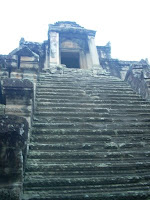 Equally majestic and ornate are the close surrounding temples. The incredible amount of detail which accompany even the smallest feature is astounding. The people of Cambodia are to be commended on the preservation and constant maintenance that is being undertaken. Whilst it seems odd to see scaffolding, hard hats and huge cranes amongst it all; it all serves to further ram home more questions on how was it done in the first place centuries ago. 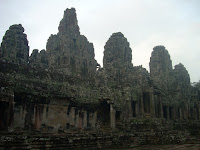 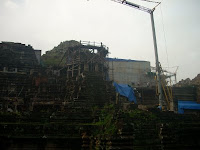 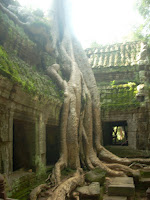 Getting up early does have its benefits. By about ten am the outskirts of the temples are awash with children indulging in high pressure on the fly roadside capitalism. An earlier met acquaintance mentioned the youth of Cambodia are naturally using techniques that are learned by spending a lot of money in western countries. Whilst endearing it can be distracting and who could say no to a hat like this? 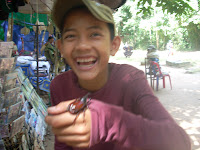 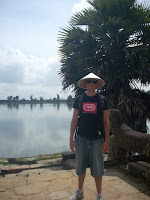 Previous writings coated us with a teflon coating of imperviousness as we blazed through the Poipet border crossing from Cambodia into Thailand. So utterly oblivious, we skirted a temple dispute without a whimper. It has to be noted that natives of New Zealand when encountering soldiers always think they are on peace time exercises and are carrying blank ammunition. It is inconceivable they could actually be en route to a conflict.

Long periods of traveling wrecks havoc with ones news sensitivity. Since we started this rather large adventure. A host of world shattering events have occurred.

None of this compares with the juggernaut that is the U.S presidential race. My forays and forages into world television have left me a crazed political pundit. I have watched debates that mean nothing to me. But do you want to know the really crazy thing ???????

Imagine my surprise when opening my email after arriving in Bangkok I had not one but two emails from the Republican party urging me to make an early vote in the election. This has caused me to refrain from further presidential race coverage and to pen a letter to McPainin.

I regret to inform you that your previous emails have been in vain. I do not know how you have extracted my email address from my cranium whilst watching your party political broadcasts but I am deeply offended and will refuse to watch American television hence forth.

This stage of our travels are winding to a close. We will soon have a reentry date and we are both looking forward to touching down and spending time with mission control. Plotting and planning our next journey shall be equally as fun and exciting.

New Zealand readers do not be alarmed. I have plenty more to write and do. You will not be bored.

Rest of the world. Do not look away or be shy I am coming for you! 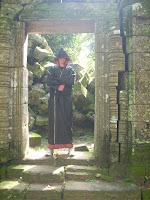 Not my Advice to a Young Captain

Back to the Beach
2 replies

Got out on the Highway Scroll to top