For the past nine months I have been busy working on a side project. Many moons ago, when my hair was long and the nights were longer my friends and I delved into the netherworld of DJ’ing, party promoting, music production and the then very fruitless search for groupies. This was trailblazing stuff back in 1998, Vinyl was still king and we were using a lot of computers, midi keyboards, Fostex audio gear and fluorescent paint. Ultimately as someone who aspired to DJ the digital dream was still a ways off.

Six years later I dipped my toes and fingers again. Native Instruments had released Traktor, but you still needed two sound cards. Without a good controller system it was also still unwieldy. In 2010 I began to see rumblings that digital DJ’ing had matured. I would investigate things again.

My thought process was simple. I would invest in something easy to use, portable and cheap. I would try it out for a few months and if I was hooked I would get something more substantial. Practicing aboard boats is not without its challenges. During the med season I would take over the crew mess and plug into the boat sound system. During the Swedish Surfing Safari I played outside a tent dangerously close to the camp ground road. I dragged my mixer to the UK, it battled the English summer, sunbathed in Ibiza, danced across Spain, frolicked in France, indulged in Italy and then we got our current jobs.

Practicing aboard our new boat is nigh on impossible. Mixing sessions are often clandestine in nature. The engine room is good if the port generator is running. It has sound baffling, we have three generators in total. The laundry is good if it is the weekend. Hotel rooms are great but there is always that nagging feeling that we will have to leave soon. Late last week we moved into an Apartment and I was very glad.

It is worth mentioning at this point that Santa bought me a fucking incredible mixer for christmas. It is quite simply awesome and I am to this date using 2% of its capability. It is also worth mentioning that the fairy god mother presented me with a Mac book Pro for my birthday. I am blessed. 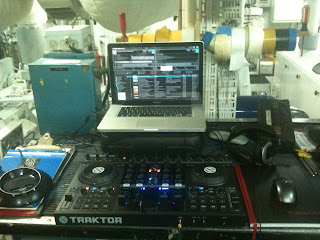 A good friend and one of the cooler chaps I have worked with in Yachting asked for a mix last year. So for the past 4 months I have been battling with fluctuating power, generator noise, interruptions, limited time and the most annoying problem. Putting together a good mix to a good standard is very challenging, time consuming and at times infuriating. Making things all the more consternating is I have a very fussy ear for mixes having listened to thousands of hours of them washing boats in the last two years.

Digressing slightly I have a bloody awesome DJ name Deckhand. Think about that for a few seconds. I can feel the admiration.

Anyway late last night, after another middling to my ears mix I had a revelation. With all of the energy I have been putting into recording a listenable mix I have forgotten these simple facts.

Finally I think I have something that selected people can listen too. It is what I would play to you if you were in the engine room, drinking bootleg rum and breathing questionably hot and contaminated air. If you want a copy drop me an email and I will send you a link. Matt do not ask me for a mix ever again! Well not this year at least.

Happiest Day of the Year

The Virgin Islands, British and American