Day five or Fireday was the most actioned packed course day yet. Before I lurch into describing it I have to say Firemen are freakishly good at setting things ablaze. If you ever have to make small talk with a fireman don’t ask them to put out a BBQ that has got out of control. Ask them to set that ladies wig alight, far more entertaining.

Our day began with some instructional videos and then we escaped into sunlight to be routinely blind folded and search out one of our dummy companions. We also did a tandem hose drill in which we climbed down a ladder into our pseudo boat and hosed out a variety of conflagrations. My hose partner was a particularly good hose partner. As good as she was, sadly she could not stop me from leaving our hose behind. I put this down to Dragons not being naturally gifted at fire dampening.

Our last exercise involved our boat being full of disco smoke and teams of three entering to remove one of two dummies. We wore full equipment ensembles and could not see a thing. We found the dummy in record time but unfortunately we had a bit of difficulty getting back out. We had also managed to find the heavier of the two dummies who proved to be particularly unwieldy. My words of wisdom after our mission “Never send three dummies to rescue a dummy” 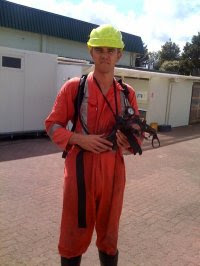 The Season of Horror

A Twice Written Tongue is Twice as Long