You do not know how ecstatically happy it makes me to mash those two very popular sayings together and commence with this commentary from the depths of the eternal city.

Our journey to Rome was not without scandal. Our usual touring party had two extra members selected on merit. A Swedish national (Uncle Phil)who can do a semi convincing impression of a Roman Gladiator and a Croatian Princess whose pigeon Russian would prove useful.

While waiting at the Viareggio train station. We drank six coffees and assorted condiments at a café. We took it upon ourselves to plug my laptop in to watch movies. The café owner was mortally aggrieved at this remedial action and promptly told us off. Three members of our touring party proceeded to deface a sugar container and liberate a glass and spoon from the tyrannical café.

The train journey was thankfully smoother. Uncle Phil is a keen riddle player and stumped us for a good portion of a trip with a combination of mind bending puzzles.

First impressions of Rome is that it is a busy place. The locals are used to the swelling rise of tourists that swamp the place and they have developed a variety of natural defence mechanisms that I will share with you later.

Personally wanting to contrast Rome with Naples we soon made ourselves to a McDonald’s. I can say with some authority that the McDonald’s opposite the Roma termini station is the most corrupt, devious and down right dangerous place I have been in. There was a constant stream of dodgy looking characters who would enter, scan for targets and then stroll menacingly outside to confer with other unsavoury types. I took some solace in the solitary security guard until I spotted him greeting several of these gangsters in turn with welcoming arms. I was also impressed with the staff members who have seemed to twist and mangle the tried and trued formula of fast foot into something truly Italian. Well done.

Scurrying to our Hotel, we slept soundly with the promises of Rome bouncing in our heads. Our hotel room was quite nice. It was certainly better than our travelling partners who were happy to announce that their bidet came with an assortment of hair and they may have had a dead mouse decaying somewhere in their room.

Starting off early is a must in Rome. We were on the road by 8:00am and made our way to the Vatican city and St Peter’s Cathedral. Our timing was impeccable having no queue to speak of we were soon marvelling at the largest church in the world. 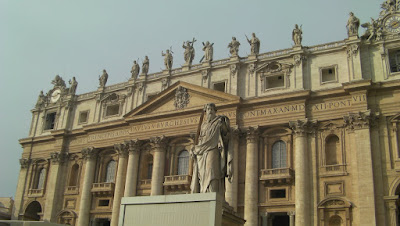 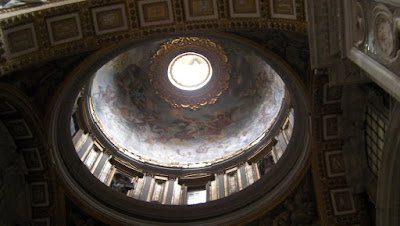 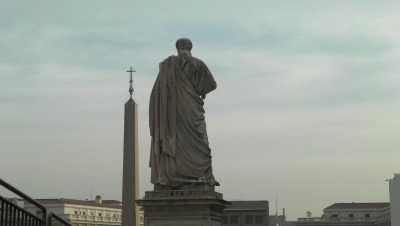 Pausing beside this statue Uncle Phil took time out from his busy schedule to give a small Swedish lesson.

Leaving the square behind we headed off to engage in a lengthy queue amongst the other tourists and wait patiently to see the Vatican museum. One very large and possibly important lady pushed in front of all of the queue. I do believe my doppelganger may have yelled at her.

The Vatican museum was good. Although I must confess a little museum fatigue. I wonder how much of ancient Egypt is actually left for me to see when I get there. It seems a lot of it is in Italy, France and the UK.

There was an interesting room full of animal statues. 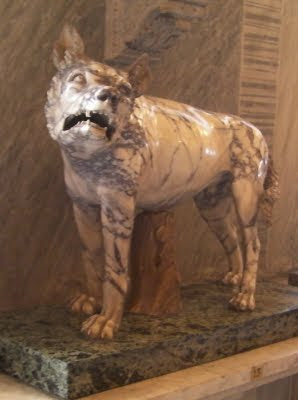 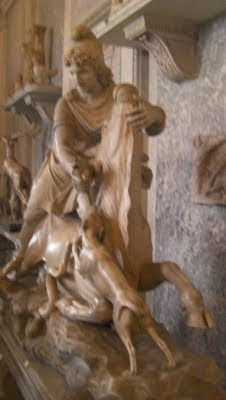 This sacrifice depiction had a scorpion attached to a very compromising part of the bull. Uncle Phil may have had a photo taken with it and could have been chastised by a very matronly Italian madam.

The long walk to the Sistine chapel was accentuated by various facades, mosaics and elaborate art works. 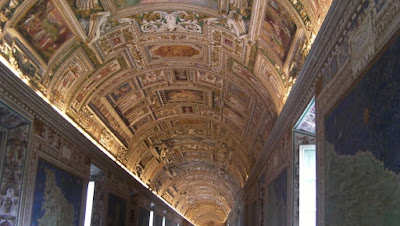 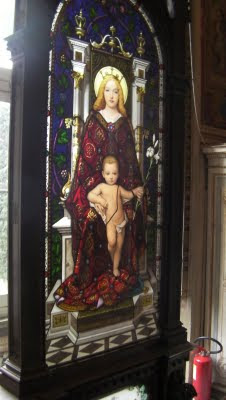 The Sistine chapel was very busy. We did get to share in some of the neck straining effort that Michelangelo must have laboured through. The chapel had an impressive array of ushers making what could have been a very enlightening Swedish lesson impossible.

From the Vatican Museum it was a quick jaunt across town to the Castle St Angelo.

By this time our intrepid and somewhat ill gang decided it would be best to eat and put our feet up for a while. We were all suffering the effects of the cold I wrote about here.

We found a magnificent Argentinean restaurant. 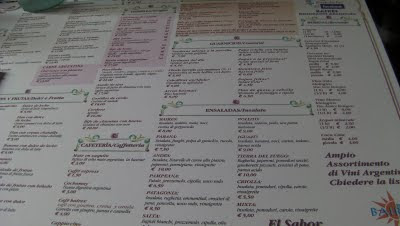 Ristorante Argentino can be found on Via Cavour 315.

Sated and less weary we made the pilgrimage to the Colosseum. A world heritage site, the Colosseum is well, colossal. For the thrifty people who intend to visit Rome on a budget we have a tip. The Colosseum is actually a lot more impressive from the outside. 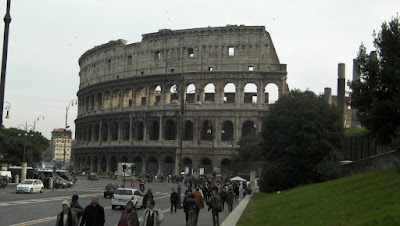 If you do venture inside there are plenty of nice photo opportunities and this excellent quote to be found. 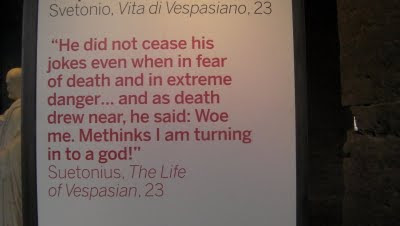 Outside there is an abundance of locals dressed as gladiators ready to pose for photographs with you and charge the earth for it.

There is also a lot of people who enjoy tooting car horns. I do not know if this is common place but it is inane.

`
With the loss of our solitary map we decided to circumnavigate the Roman forum looking for an entrance, this proved largely fruitless. Daylight was diminishing as was our vigour. After a session of information gathering we decided to take a walk to an interactive movie venue which amongst other things promised a seat inside a theatre. 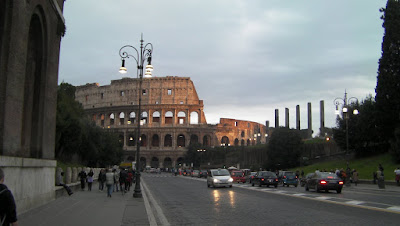 There were some technical difficulties at the theatre and we were given a generous discount and offered to visit the souvenir shop first. Uncle Phil took it upon himself to fit himself in the garb of a gladiator and scare us with his Gladiator face. 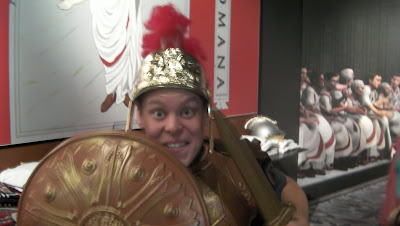 An interesting event to record would be dressing a hero in gladiator gear and sending him to fight the Gladiators outside the Colosseum. I wager the fighting would be very amusing.

Naturally dressing up as Romans is not something you do every day. So we all got in the spirit of things. 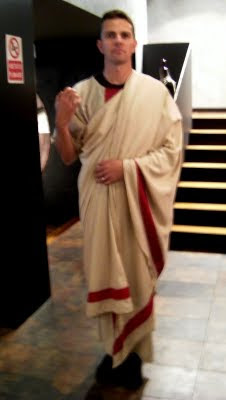 I am naturally a Senator. Uncle Phil was not keen on carrying my fasces of office. I do not know why.

Special thanks to Maria who acted as an ad hoc Russian tour guide for some random Russians on our tour.

I am naturally a Senator because during the interactive movie which included a fight inside the Colosseum I fell asleep.

It was now dark. Retiring to our hotel was on the cards. But not before we discovered a very Roman behaviour in the subway. It seems nobody in Rome has grasped the core concept that people need to get off the subway carriages before you can enter one.

Sunday was our last day in Rome. Our by now somewhat ragged and slightly haggard ensemble decided to visit the Spanish steps and the delightful fountain Trevi.

Yes that is water in the background. No that is not a tourist at the end spoiling my masterpiece.

After some mild shopping, people watching and sporadic fits of laughter it was decided we should eat again at the Argentinean restaurant.

The other diners meals were middling compared with the heights of the day previous. But I managed to order prime pork cutlets on a bed of mashed potatoes with prunes and and apple sauce. Divine.

What followed is the only disappointing part of our trip. Our group was split by gender. The girls went to organise an earlier train ride home as we were all feeling pretty rotten. The boys were to bus to the Colosseum and spend a couple of hours at the historic forum.

I am sad to say that Uncle Phil and I deviated wildly from the forum and were soon being ferried through previously unheard parts of Rome and there was not a tourist in sight. We were happy to burrow into a handy underground terminal and emerge at the train station albeit a bit sheepishly.

In closing, Rome is a fantastic destination. It deserves more than a weekend. Its charm is in its slightly chaotic exterior. It is both ancient and childlike at once. I would like to go back when I am feeling better. It is surely more beautiful at night.

Joe Versus the Curb