It was with a heavy heart I got aboard a train bound for Toulon this morning. In a sine wave of highs and lows the torrid trip to Toulon last year was a bottomless crevasse of torture.

I did have a good reason. A job interview. The train rode to Toulon through the freshly drenched flood plains. I do not think there will be as much Rose dumped on the market next year. 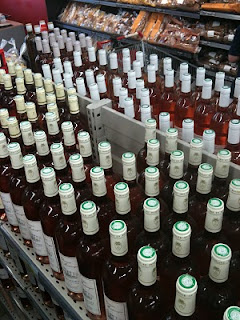 The vineyards were mud yards. To give you an idea of the water that was around last week I saw a Porche on its side covered in baked mud.

I arrived in Toulon safely, and only half an hour late. I made my way to the clearly labelled Le Porte.

If you are looking for Super Yacht berths in Toulon you need to catch a ferry to La Seyne La Mere.

Our extremely fruitless trip of Toulon last year could have been less worthless if we had known this.

My job interview went well more on this at a later date. Hopefully.

I then tried to leave Toulon. This proved difficult. I actually started to PANIC RAGE INTERNET MONEY but then the fear abated. I had to wait for 1.5 hours at the train station. It is hard to keep a concerted RAGE going for 1.5 hours unless you are Uncle Phil. Even he would agree I am far better at being happy than being angry.

On the way home I befriended a little old French lady. I consoled her over France’s dismal showing at the world cup and told her to support the All Whites tomorrow.

Which is what I will be doing doubly so.

Because I got the job.

The thing about Kiwis. We might not fly but when we fall over it is easy to get back up again.

And the horse you rode in on
0 replies