Well since I last left you, Anna and I have fallen into a very comfortable routine. We have been out every second night. The next days we have been making impassioned calls home, lying in the sun and sleeping. The most challenging things we have done during this time has been walking to get food or purchase club tickets.

This routine has included observing Spanish Ibiza and noticing how soul destroyingly annoying the English are that come here, more about them later.

Bless the Spanish they really are creative people.


The no worries car rental.

A first for me. Very clever.

Many years ago we had a realy bad pillow which was like the anti pillow. It was uncomfortable, lumpy and horrible. It was thrown away in a fit of rage and I thought it was dead. Until I met its cousin. 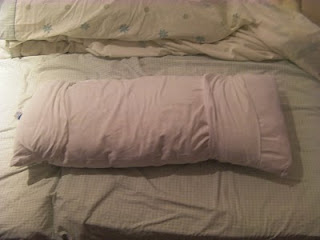 Witness the cover has no ends. This means the cover works it self off all of the time. Such a devious contraption.

Now I have lived in France and Italy and have seen many topless sunbathers but the Spanish seem to have done away with the tops of bikinis all together, such is the vast array of breasts on display. Top marks Spain.

The fenced off pool for people that don´t want to think when they are lounging on inflatable beds.

Securing a sun lounger at our hotel is really hard work. Those scurvy English get up at 6am drape towels and sunblock all over the sun loungers and then use them at their own leisure. Crap eh?

To combat this we bought inflatable lilos so we could float around the pool, drinking eating and inflatable bed dancing. Something we have perfected, it is one step up from chair dancing.

The only problem with using the main pool is that it was hard work. There were currents, wind movement, pasage planning, collision detection and underwater objects.

Too much like my real job. This is where the fenced off section of the pool comes into play. It is only 40cm deep and you are never very far away from something to grab on to. Excellent. 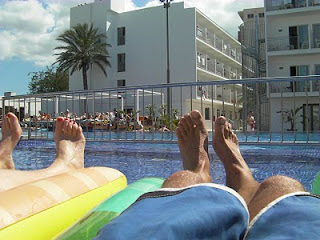 I noticed in this shot that my feet which always seem to take a battering on rather large adventures looked a big sad. The very next day we booked in for a fabulous pedicure. I had the largest feet the poor Spanish lady had ever seeen. I had to help her move them off her knees onto the ground.

Now let me clear something up. Every english person I have worked with has been perfectly affable and well to do. However, the English on holiday here are a different beasts. For starters they do not speak anything slightly resembling English. It is like their vocal chords have been grated and then thrown in a vice. They are also incredibly hard to look at, mutant like. We have also found them incredibly rude and hard to talk too. They are also very suspicous. The problem with all of this is that they ruin Ibiza for all English speaking people. Bring on the Spanish lessons.

On Tuesday night we got to see the worlds number one DJ Armin Van Buuren. It was incredible. He was soooooo good. Well you can see for yourself.

Notice I spelt release wrong. This was intentional. It is all of the Spanish I have been reading. Probably

Might I add that it was very sneaky me recording anything inside Amnesia. Because celebs like to get off their heads in Ibiza there is a total camera ban. Luckily I have a sweet technique which I will share in my next blog entry of Ibiza tips and tricks.

On Thursday night we got to see Ferry Corsten another fabulous DJ. Ferry did not have the luxury of a seven hour set and a band. But the real difference was in the arm movements. Armin is an arm flailer and flapper. Ferry is a technical finger pointer. There it is the real difference between Armin and Ferry.

So the plan is from here is to hire some bicycles and ride around town today. Tommorow and Tuesday we will have a car. Monday night we get to see Tiesto for free. Tuesday night Armin again and then we will go to Carl Cox´s closing night at Space.

On the brink of Legend

Ibiza, the Odyssey is over Scroll to top