There you have it. I have travelled around the world. I have actually been around the world in the last solar year. Starting in New Zealand I first flew to Barcelona. I then back tracked. Going all the way to the Seychelles by boat stopping in France, Egypt and Oman. I then ended up in Qatar and very nearly went terminally mad before escaping to Newcastle and finally breaking my Middle Eastern shackles.
I then flew to Italy and began my long and interesting voyage across the Atlantic to my vessels port for the foreseeable future, Puerto Rico. But I am hoping you know all of that and are more interested in what has happened in the past couple of days.
To be bluntly honest I did not want really want to fly through America. I did have a more direct flight going through Peru but it had some lengthy lay overs. I have heard some horror stories of flying through the states. I also have some colorful friends who are not allowed to fly into America. If someone wanted to keep me out they probably could find a reason pretty quickly.
With all of this tumbling through my brain I actually started packing last week. I cleaned my cabin fastidiously. It was so clean that the stewardess who cleaned it said it was the cleanest crew cabin she had ever cleaned. I hope my Wife is reading that and not reading that. I arranged northern George to give me a ride to the airport on Wednesday morning. My flight was at nine. I briefed George that I wanted the car wheels rolling at 7am.
I got up early, ate porridge and protein (food to go to war on) and then put my numerous suitcases by the crew exit. I was outside at 6:45 to find that some of the crew had taken the truck I had pre booked. This was the worst possible thing that could have happened. People that know me well, know that I have two modes of operation.
Unflappable.
And positively flapping.
I started to flap. Luckily I had only had one coffee and after a few phone calls I got a taxi driver out of bed. I took my bags to the security gate. Whilst I was waiting one of the culprits turned up with the truck. She offered to take to the airport. I left the gate guy $20 to give the taxi that had not shown up.
Shelly did a great job of getting me to the airport. Even though she missed two critical off ramps we got there with plenty of time. I had my bags scanned for narcotics by the USDA and went to get some cash in case I needed to pay for luggage.
It is worth noting that the night before I had rang my persistently incompetent bank to make sure that there were no bars on my credit card and to tell my hem my travel plans. This was in vain. So there I was with $6 to my name and a stupid amount of bags yet to check in.
I must have looked a bit flappy when I approached the counter. The nice chap there said Que Pasa and I told him of my lengthy amount of travel ahead. He was very nice but wanted me to move 3 kilos of luggage across from one bag to another. At this point I said I work on a boat and played my trump cards. My seaman letter and my NZ hat. I got a high five and waved through to customs.
It was very lucky that things worked out like that. Because I tried ringing my terrible bank once I was through and I could not get a proper line until I landed in New York. The hands on head scanning by us border control was a new experience. But I am happy to say my first leg was relatively smooth and on time.

I got some nice photos about an hour out of New York. 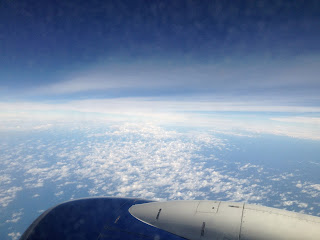 Sadly it was a grey and miserable day in New York and I did not see any of the famous skyline. I had to make do with sight seeing in the Airport Terminal.
After abusing my bank I got this hearty meal. 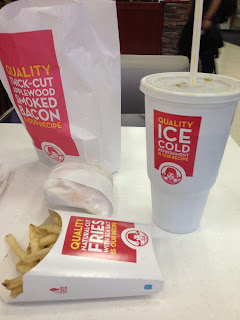 I got stuck into some refreshments. Pro tip. The next time you make a Bloody Mary add some French moutard. For a French Bloody Mary, a Mary Antoinette if you will. 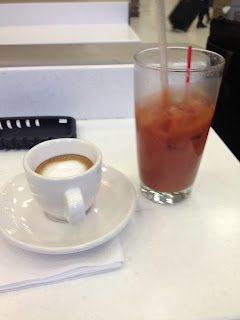 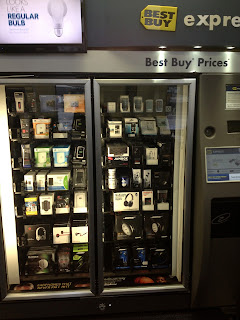 Our connecting flight was very late. I saw a Gentleman go beyond flapping. He flew off his handle. A broomless witch if ever I saw one.
Our flight to LA was two hours late. It was also very full. I was one of the last people allowed carry on luggage and I had to stow it in the tail of the aircraft. Thankfully there was WIFI on board. I busied myself making inane comments and posting photos on facebook. At one point I added salted peanuts into my cocktail after my vodka. When my Internet time ran out I started writing this. There is probably a lesson I don’t want to learn in that.

Los Angeles was absolutely stunning as we flew in. It was very clear and you could see the Santa Monica pier. At least it was a very rehearsed collection of lights doing a very convincing impression of a pier. The pilots parked the plane ok. I crossed the terminal and magically found my way to the Koru symbols where the Air New Zealands planes were.

Air New Zealand felt obliged to check in my 15kilo carry on suitcase. So that is over 65 kilos of luggage I bought home with me. The last leg of my journey was spent thinking how proud we can be of our National carrier in between discussing the finer points of earth quake structural surveying with a chap from LA and favourite TV shows with a student on the other side. Naturally I did not have anything exciting to talk about. I saved it all for here.

It is so nice to be back in New Zealand. I look forward to seeing you all and sharing NZ with the less fortunate.

How to have a happy Isolation

The Significance of Straya Day Scroll to top