With the fine people of Sweden firmly under my iron fingers I thought it was a good time to turn my attention to another country. Spain beckons and I have already seen huge readership gains with over three new visitors this year.

David joined our boat just before we moved on board. A native of Spain he hails from Galicia and is part of the deck department. My first impressions of David was that he was very quiet and was possibly not Spanish, so soft spoken he was.

Uncle Phil and I took him under our wing and we were soon coaxing Spanish words of the day out of him. When we are in port we usually try to have an English, Spanish and Swedish word of the day. These are usually forgotten quickly unless they are easily adaptable to work. Usually swear words stick.

We soon found out the reason for David’s quiet demeanour. He is a deadly weapon. David casually let slip he had broken someone’s jaw in a competitive Taekwondo match. The fact that he chose to tell this to Phil was quite relieving for me but I am sure Phil has been very careful not to anger David.

David is a keen gamer. We all bought game controllers for our laptops and have played a few together. David’s favourite game is a football game. He is a devout football fan and somehow we ended up betting a lot of money on his home team. Do you want to read something sinister?

I bet on France to beat Italy in the last world cup. It was a good bet until Zinedine Zidane let loose with a crazy head butt which did not belong in a football or Taekwondo match. 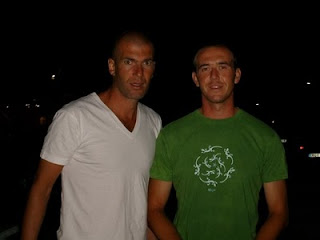 Actual photo of David with Z|Z. What the hell? What are the chances of that?

David has impressed us with his willingness to go out exploring. When we had a blizzard in Viareggio he was out pounding the snow covered streets and beaches. When we had a day off in Malta he quickly ran a marathon taking photos as he went.

David did not drink much coffee when he joined us but he soon came around to the delightful sitting on ones bottom sessions that serious coffee drinking entails. I have even seen him glancing at his watch hours before coffee time. A very quick learner is David.

David’s knowledge of Spanish was a godsend when we were in Italy. He was quickly became go to guy when we had tricky questions in Italian. Spanish and Italian are quite similar. Thanks to David I know the Italian word for broom. Two of our favourite yard workers named David Spagnolo , we found a better name.

David is not as quiet as he was. He actually has quite a good sense of humour. David has been known to comment on my penchant for sometimes observing him and Phil work instead of actively participating. I am obviously storing things up to write about.

Why do we call him El Fuerte? When we got our game controllers I also got a copy of Street Fighter 4. There is a Mexican wrestling cook named El Fuerte who screams a lot. When we asked David what El Fuerte means, the translation was.

Naturally we started calling David El Fuerte straight away and you know what? The name has seemed to stick.

Finally a few words for Spain.

I got hit by a car once

For my next trick

You need Balls to Paint your Nails