The Pirates Pilots of Egypt.

My first on the ground memories of Egypt will always be confusing. I enjoy being bamboozled as much as the next drunken panda but Egypt was particularly puzzling. We had just finished a three day passage from Malta to the northern tip of the Suez. Port Said.

Funny play on words announcement. Port Said is pronounced Port Sai-Eeed. But if you are English speaking you probably want to pronounce it Port Said. Right Said Fred are an English pop group formed in 1989. Port is nautical left. A guy named fred saying Port in Port Said would be kind of left said Fred and very funny. As would a bunch of guys singing ‘Im too sexy’ on the back of a Super Yacht in Port Said.

AAAAAnyway. We were not really expecting to see any Pirates until the Gulf of Aden but while we were parked outside Port Said a dark and swarthy looking ship came out of the dark. It came along side and we were quickly boarded and then the Pirates made their demands……..

“Got any cigarettes my friends?”

We had been boarded by our first Pilot and we were all going to be gnashing our teeth very soon.

Nautical tip of the day.

Pilots are used when entering a harbour or special water way. They can be a boat you follow, or they can be a person who comes on board to guide you. Egypt by nature of its canal has a monopoly and its systems are particularly corrupt. Every interaction with an official requires at least a carton of cigarettes. Pilots are particularly demanding but more about them later.

Under the guidance of the Pilot we were soon docked in Port Said. It was nice to see AnnaEva a boat I worked on at the Monaco Grand Prix. We were soon waiting earnestly while we were boarded by shipping agents, quarantine doctors, electricians and other nefarious types. Under the guise of work these people were all got rid of with cartons of cigarettes. Fortuitously our ships gangway decided to have a siesta and invaders were left with slightly difficult route.
One would be invader gained my attention from the dock. He demanded to speak with our shipping agent. I asked him what his name was. He said it was policeman. What a charming name.

Because our gangway was having a break, we had to leave some heaving lines on the dock until we could leave. My grand idea was that they could be tied to our mooring lines as we pulled them in. (I am sorry if that sounds awfully confusing. Living and working on a boat can salten ones vocabulary, irrevocably I fear) When we went to leave our heaving lines had disappeared. These were probably pilfered by a guy who would not let our lines go until we gave him cigarettes. We had ran out of cigarettes!

We eventually left at 12am and we were soon learning the Pharaoh like ways of the Suez canal pilots. Rant time.

I got thinking late last night that a good dose of capitalism would sort out the Suez canal and its corrupt practices. I had a quick glance at a map of the region and have picked out a candidate.

Straddling the famous 1949 armistice line, The Israel canal is a fantastic alternative to the Suez.

Anway where were we? The gentle cigarette pestering of port Egyptians was nothing compared with the deluded god like ways of a Suez Canal pilot. We had to reply to every request because the pilot will quite happily leave your boat leaving you stranded, impounded and going no where. We had two pilots for our trip. They both took cartons of cigarettes and soft drinks, cash bribes, chocolates and anything else they asked for. The second pilot took one of our guest cabins whilst we had a lay over in a lake. This is all normal practice. The second pilot also had a sycophant who laid waste to our sweets supply. No happy with a few, he grabbed by the bag. He also set up a shop of sorts in our crew lounge selling trinkets and souvenirs. Not many of us were feeling very touristy.

What an adventure! I did get some good photos of the trip. 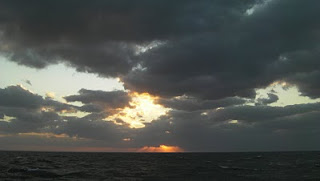 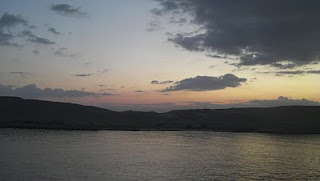 Sun rise on the Suez. 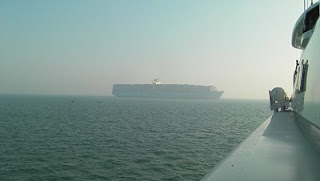 Biggest container ship I have seen. Photo does not do it justice. 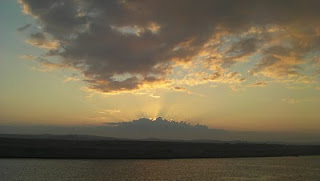 Sunset on the Suez.

The good news is we are now out of the Suez Canal. I have already requested that we take the long way home. The problem…… we do not have a home.

A Weekend Up North

Back to the Beach