This post is littered with bad car turns of phrase. Please wear a seatbelt.

Quite what drove us to rent the worst rental car ever is quite a story. The actual mechanics of getting a B1B2 visa are complicated and will be explained in detail at a later date. The middle stage of this perilous journey required us to travel from Antibes, France to Florence, Italy.

France is gripped in rolling industrial strikes at the moment. The French people I have spoken to the strikes about are unreservedly apologetic about them. They are also 100% behind the need to strike and the wonderful tradition that striking in France is.

Like most liberal leaning Kiwis who do not pay tax I support the strikes as well, so long as they do not hinder my ability to get more tax free income. Therefore I was quite dismayed on Saturday when we found out there were no trains planned for Sunday.

This sparked a furious bout of retroactive contingency planning. We found out we could take three buses to Ventimiglia and then catch a ten hour train with one change to Florence. This was not particularly appetizing with 80 kilos of luggage. We decided to rent a car.
Given the tenuous state of any transport in France we decided that we would bite the bullet and do a one way rental to Italy. Europcar allow you to do this. We had not rented a car from Europcar before.

It now is blindingly apparent that a lot of the modern world had decided to do the same. This explains the simply dismal car that greeted us.

Feeling a bit flirty I had splashed out and hired a sportish small car, a Peugeots 207 would be quite a nice drive I figured.

At first glance the Peugeot Teepee is fucking ugly. It is uncomfortably tall and appears to have the aerodynamics of a block of slightly used butter. 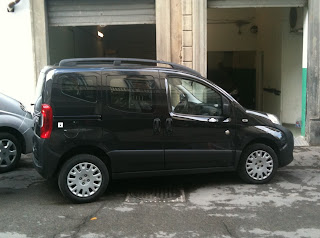 This feeling continues as you step inside. A dysfunctional interior greets you and you start to wonder if you have had a cruel joke played on you.

An uneasy growl starts with the engine, as you drive away you find that the block of butter analogy is quiet apt. The performance is pathetic. The engine clearly belongs in a smaller vehicle. Maybe a largish diesel powered ride on lawnmower.

We drove this abomination for 5 hours. We had to stop at regular intervals to console ourselves with the incredible roadside coffee that Italy has on offer.

I began to think what is the desired purpose of this car. It has a tiny boot for its size, bad performance, a roof rack and a lot of headroom.

It came to me after a particularly strong espresso. If you had a fancy dress party you needed to go to(maybe a mad hatters party) with a group of people you did not really care for and some of your costumes were so elaborate that they would only fit on the roof rack. This car is probably for you.


Europcar held onto a 1 thousand euro deposit after we had returned the teepee. This caused a minor panic session when we tried to leave Florence and get to Milano. After some questioning we found out that they can hold the deposit for up to two weeks. It pays to read the small print, even when it is in French.

Finishing my Tour of Duty in the Middle East

How to have a happy Isolation

Rediscovering the Americas Scroll to top