On Wednesday 11/1/2017 past I had the good fortune to have my usual economy trip home upgraded.

One of my biggest achievements last was being able to hit Gold Level with Air New Zealand and the Star Alliance. This gives me Koru lounge access and two free upgrades. I applied these as soon as I got them and this made for a very happy taxi ride to Heathrow. Hitting Gold is quite an accomplishment. It is literally a carrot dangling ahead which you can keep trying to grab and it slips away. No small feat when you should only be flying 6 times a year.

I introduced my taxi driver Ravi to my latest creation. He felt it was good but was so flattering he thought I should introduce some of my warbling over the top. I think I am a few years of good filter developments away from this but the sentiment was nice. I wrote my sound cloud link on one of his business cards and I think I will make some new cards soon. I am such a more diverse character when I had my last ones made in 2008.

Checking in at LHR was pleasant. I know Airport etiquette very well. I had payed for my upgrade tax before I checked in. I had all of my papers in a travel wallet. My bags were both under 23 kilos. I had my American VISA page tagged. The check in desk person remarked on how organised I am. I smiled.

I kind of have to be otherwise I miss flights. Palma 2011. Lest we forget. Looks like I conveniently forgot to write about missing that flight. Conveniently forgetting things is a good thing about middle agedness. More about that later? 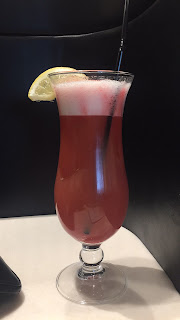 A few hours later I was ready to board. Because of my upgrade I got to board with Premium Economy. I like the way Air New Zealand fills up planes. It is efficient and it works for most people.

Enter the loud obnoxious bearish polo wearing toff and his family of ill convenience. Rudely queueing in the Premium Economy queue getting annoyed at the queue. Being asked if he was a business class traveller. Saying “of course I am” and then getting directed to the right queue.

My first leg to Los Angeles was quite pleasant. I ruminated on my time in London and the busy time ahead. I do like the food in premium economy I actually found myself getting quite full just from the starters and forgetting about the mains.

I was then ready to complete TSA screening and bag scanning again. Unwittingly I managed to get in a queue with a lot of people with Prams. Prams mean small humans and a lot of luggage. Hopefully I learned a little from this as we will soon be bundling up our bundle of joy and doing the very same trip in reverse. It did slow me down a bit. But this slowing down meant I was soon enough on my plane and in the air. So I thought.

Unfortunately somebody had the ill fortuned tenacity to board the plane with some sort of medical problem. The details of this problem were never released to us but they held us up two hours before they were taken off the plane. At the time I may have felt a little aggrieved. I would miss my connecting flight home to Kerikeri. Now I wonder if they are OK.

I am not accustomed to the extra space premium economy provides. Especially as I was given a window seat for this leg. I did try a variety of sleep methods including one delicious one I call the hunched over crash test dummy. By folding myself forward in crash position. I was able to cut circulation to most of my vital organs including the brain and lay in torpid stasis for at least 3 hours.

I awoke a couple hours out from New Zealand to this. 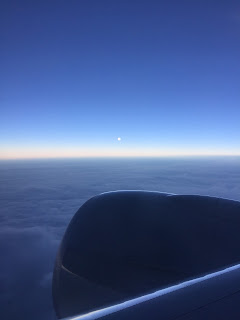 That is the full moon in Cancer on Friday the 13th of January. 13 has been popping up a bit in my life over the last couple of years increasingly in the last two months. The Mayans believed 13 to be a special number of Transcendence. Not unlucky in the slightest.
On the ground I then had to spend a few hours in Auckland rehydrating and acclimatising to the delicious humidity. Shortly after lunch I was home to my Wife, Dario and Dog. Life is pretty good right now.
Plenty more to come forth about them later.
January 21, 2017/0 Comments/by El Draco
https://theselines.com/wp-content/uploads/2021/05/Myriad-Lines-2.jpg 1413 2133 El Draco https://theselines.com/wp-content/uploads/2021/04/These-Lines-Logo-Slim-White.png El Draco2017-01-21 18:14:002021-05-06 00:30:37The Upgraded Trip Home LHR>LAX>AKL>KKE

The Myth of the Runners High