You have probably heard of distasteful locations be described as the armpits of Europe/Africa/Gore ect. Gibraltar does not even rank in distasteful armpits. I would describe it as the discarded but fondly remembered toenail of the once powerful British empire.

Still, they are proud of it. Proud that it remains resolutely English in the face of Spain. Proud of its large and dizzying array of English comfort food. Food that ships stopping in Gibraltar must stock up on because Capitalism has not supplied unwholesome convenience food to every corner of the explored universe. It appears someone neglected to tell the English that their food is not in fact food. If you are English and reading this you now know.

We did leave Gibraltar for Bermuda in the end. Gods be damned. It has been a very peaceful crossing. We left Satellite television coverage after about 2 days. I take great pride in telling people I would rather watch a discarded toenail than Sky News. Sky News is Fox News with an English accent.

Recent changes in my neural pathways have left me finding the mainstream media about as palatable as English food. It has become clear that a narrow unhealthy narrative must be maintained how ever stupid it is. This commercially sensitive narrative is at odds with common sense.

Personally I look at the almost monthly school shootings happening in America as acts of Terrorism and a far more real/quantifiable threat to America than ISIS.

A broad definition of Terrorism would say that these are not politically motivated.

I would then ask why are American politicians not politically motivated to sort out gun control?

When I got to spend time in Seattle. I got told about the history of gun control in America, bring your gun to work day and other quaint little oddities. These were all told to me by a perfectly sane American and it is all insane.

Guns are a constitutional right so the people can form Militia and do noble things. Where are these Militia? They were nowhere to be seen last month when this polar bear was put in jail for protesting against climate change. 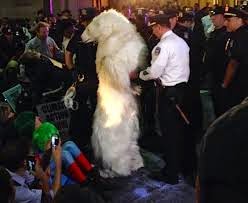 Back at sea I have settled into the monotony that is an Atlantic crossing quite well. I have kept a healthy routine of meditation, exercise, crew mess and bridge banter. I have also performed many important technical tasks such as live streaming the Kiwis thumping Australia at the Rugby League into key areas where Australians are found.

We arrive in Bermuda on Wednesday. I will travel to New Zealand on the Thursday arriving on Saturday via America. I will not be struck down with Ebola. I will not be affected by Terrorism.

Create your own news.

I googled how to stop viewing a particular news site that I don’t want to read but I always end up reading. It’s like the KFC of news sites. Google took me to the particular website. Anyway like most things there is an app for doing this just self censorship.

Please don’t block me, that would be a most strange outcome and feedback loop.

STCW95 Day One. Thank the Titanic

Before and After Darkness Scroll to top