I have not seen as much of Malta as I would have liked. It is a petite place but work commitments have stifled any real exploring other than my round of golf and some bar hopping on Saturday night.

Last night under the command of Uncle Phil we set off to play pool. As implied earlier it was just three of us. David our ever capable Spanish liason was roped in. Our first real problem was when Phil informed us he did not know where the pool table was or the Yacht club that contained it. Our second problem was Phil and David freaking out at cars driving on the right hand side of the road.

As the best English speaking person I was chosen to parlay with the locals and get directions to the fabled Yacht club. Maltese people speak very good English, Italian and Maltese. Uncle Phil is surely not a throw back to the Viking era. He wibbled and whined all of the way around the coast as we headed towards the Yacht clubs location.

When we reached the Yacht club we headed in and started sampling some of Malta s local beer, Cisk. Cisk is very tasty. 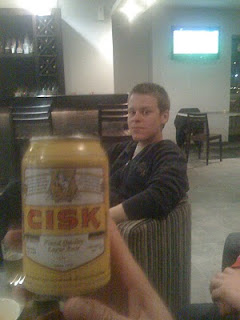 Sadly there was no pool table but we were not about to let a lack of a pool table get in the way of an imaginary game of pool. There was a football game on TV. I think I have mused on this before but emigrating north infects antipodeans with some of the football fever which has been a plague in these parts for ever. I can now sit unaided and watch some football and make very little in the way of snide remarks. More about football in a bit.

I then had a rather large epiphany. If you had told me 10 years ago I would one day be sitting in a Yacht club drinking a beer I have never heard of with a Swede and a Spaniard in Malta I would have thought you slightly crazy and politely changed the subject. Which is what I am going to do now.

Back to football. It turns out that David’s home team is going to be playing a major game tomorrow night. The odds on a win are long. But after three beers anything starts to sound good. So we pledged we would all bet fifty euros on his team winning.

We were eventually asked to leave the Yacht club. We were the only patrons and probably were making it look untidy.

Not a bad night of not playing pool.

The Coke Tally and Unfinished Works