When I last left you. It was an edge of the seat ending. The weather had turned, we had missed our convoy and we were about to lose our internet connection.

The weather was really something. We had a wind of up to 50 knots blowing straight at us and 5 meter waves to match. I took some footage of the waves from the safety of the bridge. Actual footage does not do it justice hopefully the words will.

You can see the bow getting covered with water. We are some 15 meters behind the bow and quite elevated in the bridge.

The only thing that could have made it more exciting would have been going to the bow to do some work. Imagine my glee when I was ordered to go and investigate the suspicious looking rescue tender. Now I have mentioned cleaning cleaning products before. Rescuing a rescue tender is probably in the same realm of work place sentence inanity.

Luckily for me, El Fuerte and our chief officer Dragan came along. Uncle Phil was strangely missing. He was happy to tell us afterwards that he had been blissfully asleep in the crew lounge. Initial diagnosis of the tender was not good. The heavy pitching of the bow had ripped all of the fixing shackles off the tender. 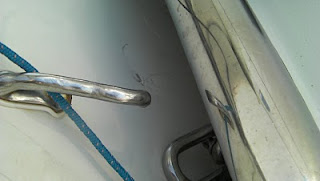 The tender had then been pushed backwards and had come to a stop wedged under the crane. The jet engine was damaged and the tender was full of water causing all of the safety equipment to swim. It was heartening to know the hydrostatic release on the remaining life jacket worked. 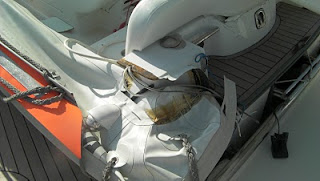 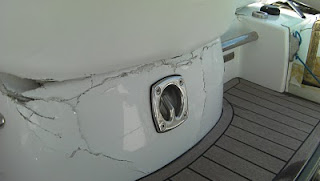 We set about trying to tie the tender down. Danger levels were rising when I took my first wave of water in the stomach. My second round with Neptune caused me to fall over backwards. Luckily I broke my fall on my neck with a handily placed bench seat. El Fuerte was washed off his feet. Dragan held onto the tender and nearly broke his leg wedged between a capstan from the force of the water. Dragan quietly told us quite loudly that we had to get out of here and our situation was FUBAR. The third round with Neptune caused me to get washed under the broken tender. El Fuerte was sent careening between Dragan’s legs in a most undignified fashion. It was time to abandon the tender. It wasn’t going anywhere and it was not going to be rescuing anyone for a while.

I do believe I was in a mild form of shock after fighting Neptune. We were all very lucky none of us was not seriously injured or washed overboard. My ipod was not lucky. Even being inside a Gill suit was not enough protection for him. The tender is a write off. We are going to replace it with something a bit more hardy and with a detachable engine.

Happy Birthday to Me

I got hit by a car once

The Gaul of it
2 replies