Where were we? We were driving to Prague.

High speeds, snow and salt combine to form a delicious crust on ones windscreen. With our rental cars windscreen wiper water depleted and no visible way of opening the bonnet we stopped in a very quiet German town to find help. It took my legendary (useless at charades) skills to purchase a packet of chewing gum from a petrol station and discover no one spoke English. Luckily I was able to mime a car bonnet opening to a nearby builder and he helped us to open the bonnet and I filled up the aqua receptacle. Did I mention it was bloody cold?

The Czech border was interesting. It looked like it had once been an effective border control area. It was now was a bunch of kiosks where you could buy road user stickers and refuse getting your money exchanged by helpful Czech girls. There was a lot of snow on the ground.

The descent into Prague (you are driving down hill a lot) was unremarkable although I did spot a huge IKEA. I do admit feeling a bit of anxiety about driving into the city as every web page I read about being a tourist in Prague had stern warnings about driving a car into Prague. Some pages suggested leaving your car out of the city and using public transport to get in. Other pages said it would be crazy to take a car in and it would surely be stolen or broken into. Luckily I had not one but two women to listen to. Our GPS was a female. Gentlemen I am sure you will agree that more is always better and if you have two women giving you directions it has to be better than just one.

With our car safely stowed(salty sea dog talk) and our lodgings vetted(wordy writer words) it was time to explore Prague. Prague is an old city which has millions of visitors each year. It’s magic is in the way it allows itself to be discovered and its many delightful distractions. Prague is a city which has an interesting pulse. It’s pulse is kept pumping by a variety of things. Let me detail some of them. 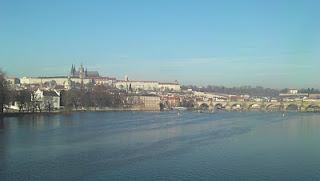 Prague’s development seems to have been managed well. Since the fall of the iron curtain a disproportionate amount of KFC, McDonalds and other pillars of western society have sprung up. However, this is balanced by Prague’s substantial historical places which have dodged bombs, invading tourists and the wrecking ball. 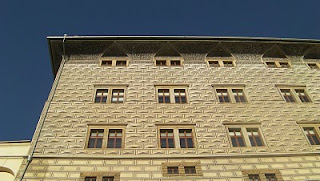 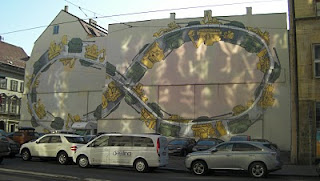 After you have left your car in Germany or a neighbouring country you have probably caught a train or plane. Prague does have a fully functioning public transport system. There are trams whizzing all over the place. There are suspect cab drivers and there is the underground.

We ventured into the underground one night. We were taken back by the speed of the escalators. I would not like to get on one of the escalators on my way home after a night out. They simply barrel along very efficiently. There was also a lack of a ticketing system. Happy new year? 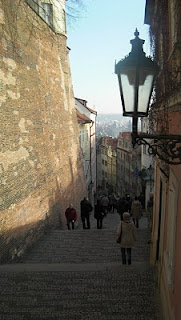 If you have the time and energy, walking around Prague’s cobblestone streets is very enjoyable and dare I say it romantic. Simply refuel with mulled wine in winter or a nice beer in summer when you start to feel tired.

Inside the old town where people congregate you will find street vendors selling mulled wine, roast pork and exceptional sausages. Mulled wine is an excellent antifreeze as are sausages and pork. Alcohol on the whole is an important city utility. More important that electricity or water; you will find alcohol for sale everywhere. Where else in the world could you clip a coupon for a laundry which promised free shots with every load of washing done ? 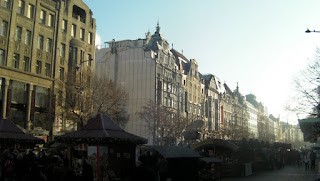 Staple vices are catered for very well in Prague. Not only can you eat well and drink fantastic beer but you can purchase very noxious looking absinthe and fine cigars at every step. There are a wealth of boutique casinos everywhere. I discovered one underneath our hotel the very day we were leaving which we had had no idea about. Prague also has some very relaxed natural pharmacology laws and a huge amount of strip clubs.

But it doesn’t. At least not in our experience. Everyone is well behaved and very happy. We did see one man who had far too much to drink having difficulties eating a hot dog. We felt safer in Prague than we have anywhere late at night in our travels.

The crescendo of our trip was a night out in Prague. We visited a night club called Karlovy Lazne, It is the largest club in central Europe and is a place with a lot of history. It was very well organised and I look forward to being a jaded old man reminising about the time I went to Prague clubbing. 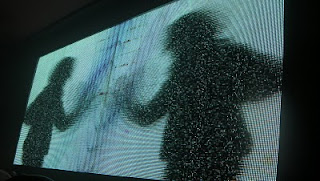 Some of the earth shattering innovations included.

It would be very easy to spend months in Prague having the time of your life and still feel unsatisfied. I would like to revisit when it is warmer. I had my first beer post Prague last night and it tasted quite ordinary after the delicious Pilsner which you can find in your local Prague Laundromat.

Tune in next time for a very cursory expose of a little town called Verona.

My Chronicles of Paris #1

The Problem with Leaving…
1 reply