Two weekends past we ventured out into the heatwave that had descended upon the Mediterranean and caught a train eastwards to the seaside town of Santa Margherita.  If you hadn’t surmised from my patently painted clues we are now on the Italian Riviera and Santa Marghertita  is the closest train station to Portofino.

The weather was oppressively hot and it was with some miss placed luck that we ended up in the first class carriage.  To the best of my knowledge first class carriages in Italy are full of second class ticket owners. The second class carriages are full of people with no tickets. The highlight of the trip for me was a little old blind lady walking past swearing at ghosts or some other spirits and swinging her cane in an erratic fashion. Maybe she was a witch . There was a moment of mild panic as we lost sight of the coast but a lovely Italian chap was kind enough to let us know we should get off at the next stop. 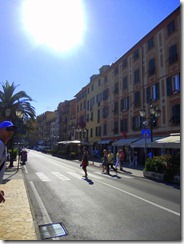 Santa Margherita was a delightful spot and with our stomachs growling we stopped at the closest restaurant we could find which happened to be a beach resort. With my bright coloured clothing and poor Italian accent the waitress translated Bira Moretti into Becks. E’gads I thought, I looked or sounded German. 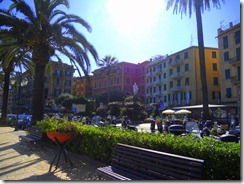 Scurrying out of the restaurant we descended a flight of stairs and walked around the salt water pool to enquire about renting a couple of sun loungers for the afternoon. The pool attendant informed us that this would cost 5o euros.  50 Euros is a princely sum to sit upon a lounger that is not even on the beach.

The scorching sun rendered me incapacitated. Anna went swimming several times and  I spent four hours debating whether I could move to the pool and skilfully adjusted my sun visor. I did not reach the pool but I did reacquaint myself with the powerfully refreshing cocktail that is Italian Gin con Tonica. 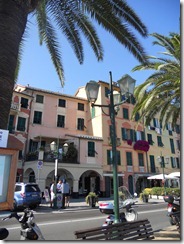 With the Sun still beating down we said goodbye to our loungers and caroused the town looking  information on how to get to Portofino. Santa Margherita had many charming qualities. 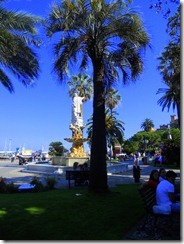 Parklike surrounds to sit beside. 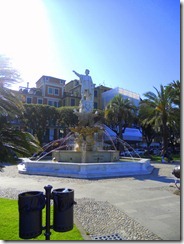 It also had a prosperous and lively amount of gelataria. I had a very interesting combination of Kit Kat, pistachio, straciatella and tira misu. Yum.

After a very unsuccessful bartering session with a taxi driver (35 euros no thank you I could sit on a sun lounger for that) we chose the more financially and socially appealing bus. Being a gentleman and wanting to soak up the bus experience I stood with the other late on the bus people and was immediately transfixed with the oddest of sights. Two rather large Italian chaps with hair curlers upon overly clipped hair.

The bus ride to Portofino was a winding one and there were plenty of opportunities to look at the sea when  we were waiting for cars to pass in the other direction. I found myself almost wanting to announce to the bus that I worked on one of those large shiny floating vessels. The words escaped me(more about my Italiano later)

After such an interesting bus ride it was quite nice to stroll down the hill into the once sleepy fishing port of Portofino. 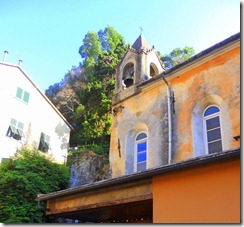 We walked around the port and spied a perfectly placed castle looking out over the bay from an epic vantage point . With scant regard to logistics we started the long climb up to see what we could see. What we found was our lungs nearly exploded climbing the hill. There was also a wedding on which meant we could not actually take a close look at the castle.

We did take some photos on our way up and down. 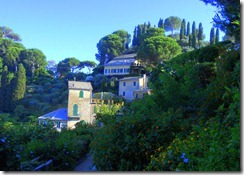 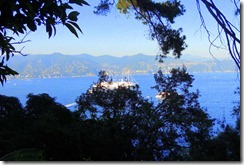 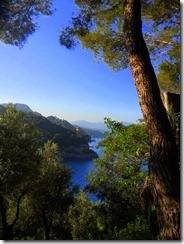 Not a bad spot eh?

I quite like this photo which has me in the foreground. It really captures the spirit of carrying a man bag for thousands of kilometres through beautiful places. When I am buried I want to be wearing a manbag with my wallet, phone and a chupa chup for old times sake.

We had a nice dinner in Portofino. Pro travel tip. If the restaurant has reserved signs everywhere just turn up 2 hours before it gets busy and look awesome. They will find a spot for you.

After dinner we were going to catch a taxi back to Santa Margherita but the charge us 40 euros to return. Naturally we were only too happy to climb aboard the bus and revel in the sunburned and mildly soozled ambience on the way back.

That was it. Portofino and Santa Margherita in a day.

Tune in next time for the Cowboy Italian Special!

In Stitches in Sitges